Blodeuedd's Monday Review: Say No to the Duke by Eloisa James 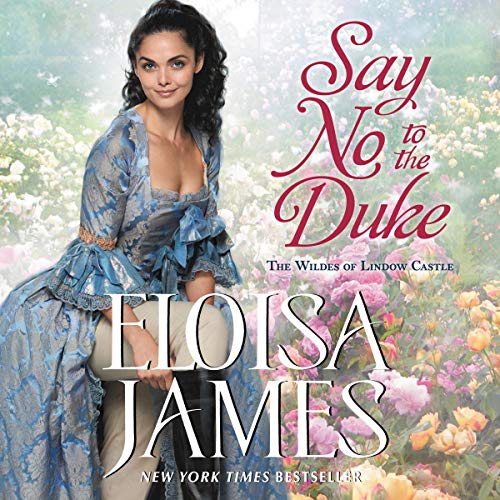 Betsy has done her best to put on the persona of the good girl persona, the perfect society girl, the perfect bride to be. All to wash away the stigma of her mother running away with a Prussian (also her sister's book looks to be really interesting as she is blonde and obviously not a Wilde.)

But yes, Betsy is not really the quiet demure one, she is a Wilde, she rides horse standing up shooting arrows. She plays billiard and she wants to wear breeches. But she also wants to show everyone that she can catch a Duke. She is also really scared that showing passion means that she will run away and leave her kids. She carry her mother's shame in her heart.

Jeremy has ptsd from the revolutionary war. He drinks (and not) and tries to continue a normal life.

They banter, a lot! The things they say, wow, this is not regency. They do say the naughtiest things.

One problem I had was that they talk, a lot! Honestly a bit too much, the whole book was these two talking.

I also wanted more of aunt know? I have no idea how to spell that. But she fun! And the brother's books do sound fun, as those her sisters that will come.

I also felt that she should totally have gone for the Duke. Sure he was stuffy, but I think he would have been great. But then she was wild and he was too. So Betsy and Jeremy will surely continue to banter the rest of their lives.

I did want more of the supportive cast cos they sounded fun!

Narrator
She was great with all voices, she really got Betsy's voice right, the perfect blend of demure and wild.

Lady Betsy Wilde’s first season was triumphant by any measure, and a duke has proposed - but before marriage, she longs for one last adventure.

No gentleman would agree to her scandalous plan - but Lord Jeremy Roden is no gentleman. He offers a wager. If she wins a billiards game, he’ll provide the breeches.

If he wins...she is his, for one wild night.

But what happens when Jeremy realizes that one night will never be enough?

In the most important battle of his life, he’ll have to convince Betsy to say no to the duke.
Written By Carole Rae at 6:30 PM

ugh too much talking

Melliane
Me too, in the past