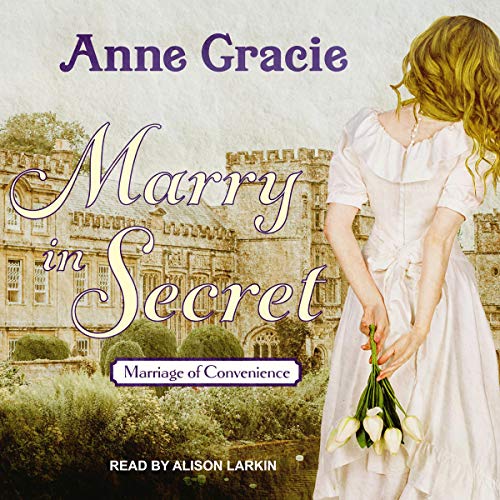 
Honestly I felt this one got worse and worse and I do not know why I did not dnf.

Rose is about to marry a Duke, but then he long lost hubbie shows up. The one she never told anyone about, the one she married at 16.

First the drama is about her family not wanting him around.

Then when there is happiness, the drama changes to this other thing. That just felt weird.

I honestly lost interest and it felt like a chore. I know I know, DNF! But I need to dnf audio in the first hour, when I am half way through I push on which I know realise is a mistake.

Lady Rose Rutherford - rebel, heiress, and exasperated target of the town's hungry bachelors - has a plan to gain the freedom she so desperately desires: She will enter into a marriage of convenience with the biggest prize on the London marriage mart.

There's just one problem: the fierce-looking man who crashes her wedding to the Duke of Everingham - Thomas Beresford, the young naval officer she fell in love with and secretly married when she was still a schoolgirl. Thought to have died four years ago he's returned, a cold, hard stranger with one driving purpose - revenge.

Embittered by betrayal and hungry for vengeance, Thomas will stop at nothing to reclaim his rightful place, even if that means using Rose - and her fortune - to do it. But Rose never did follow the rules, and as she takes matters into her own unpredictable hands, Thomas finds himself in an unexpected and infuriating predicament: He's falling in love with his wife....
Written By Carole Rae at 6:30 PM

Oh no, sorry about that!

Oh boy! Sometimes the drama just gets to be too much.

Huh, I tend to give audios a longer chance, too.

Carole
Such a chose

Mel
Sigh, I should have given up

Sophia,
I wonder why we do it

Oh no, that’s the worst when you stick with a book hoping it will get better and then it doesn’t! I hate that.

Oh that stinks! I've loved the series but not done this one. Boo! :(