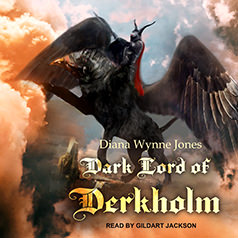 My thoughts:
She really takes every cliche and throws it in here, and still she manages to create something that is not just humour. It still stands on its own.

There is a fantasy world that is being exploited by the evil Mr Chesney from what I assume it our world. Oh he was an ass. He was all, I am doing you all a favor! Letting 1000 pilgrims run around pillaging, killing and raping. Sure the people in this world get paid, but now they have realised that it is too little for all the people who get hurt every year.

So they take the worst wizard (who is actually a good one, but he just focuses on other things like genetic manipulation) to ruin it this year. Derk is to play the Dark Wizard and there are so many rules. Dang that Chesney guy!

There are also other stereotypes that the pilgrims get to see.

But yes I liked Derk and his family. Griffins that he made (I said he was weird). I liked them. His son Blade was rather annoying at times (but then he was meant to be that). And his daughter Shona, well there is this thing that happened that really bothered me and felt brushed over. I wish she had skipped it entirely or done it properly.

It is a fun adventure where we follow Derk as he is trying to be the Dark Lord. All awesome side characters too make it fun to listen too. I really should read more of her books.

Conclusion:
Fun times! Not your usual kind of fantasy

Narrator
He did a good job with everyone and it was enjoyable listening to. A great voice for this kind of fantasy

Blurb
Mr. Chesney operates Pilgrim Parties, a tour group that takes paying participants into an outer realm where the inhabitants play frightening and foreboding roles. The time has come to end the staged madness . . . but can it really be stopped?

Master storyteller Diana Wynne Jones serves up twists and turns, introduces Querida, Derk, Blade, and Shona and a remarkable cast of wizards, soldiers, kings, dragons, and griffins, and mixes in a lively dash of humor. With all the ingredients of high fantasy, this unforgettable novel will delight fans old and new.

That cover is kickass!

sometimes it's interesting to have something different

Melliane
It so is!

Sounds really different. I'm not a big fantasy of this sort fan, but I'm glad it was a fun read for you.