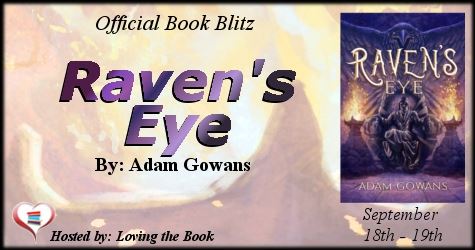 Ever since magic caused his mother's death, Ha-Neul, crown prince of Balhae, hates witches and the magic they wield. He has instituted harsh laws against all magic users.

Lisa is a young witch working undercover as a servant in his palace, hoping to gain freedom for her people. The last thing the two expect is to fall in love. But when Ha-Neul learns that Lisa is not only a witch, but the daughter of the Prince of Vires, land of witches, he banishes her. Distracted by heartbreak, he is caught off-guard by a military coup.

In hiding and on the run, Ha-Neul swallows his pride and travels with his siblings to Vires, planning to beg Lisa's aid, only to learn that she has mysteriously vanished.

Now his only hope in reclaiming his kingdom and reuniting with Lisa lies in the remote Northern Mountains, a country no one has ever penetrated and rumored home of a powerful magic source. There, Ha-Neul learns that a being powerful beyond comprehension has been carefully guiding his destiny. But if Ha-Neul can't let go of his hatred of all things magic, and accept the new path offered to him, it will mean the destruction of his entire world.

Adam Gowans is the youngest of five Air Force brats, out of which his siblings have voted him the weirdest. He loves anything that deals with stories, including movies, novels, television dramas, music, video games, manga/manhwa, and webtoons.

In his mid-twenties, he lived and taught English in South Korea for four years before returning to the States to live, like many LDS authors, in Utah.

His first novel is On Angelic Wings, which has a planned sequel, but the sequel will be released after two other novels that are calling for his attention.

After they ate a filling breakfast, they ordered a picnic from the café and walked to a large park. There, they played on the playground like the children. Eventually they were playing with the children as well. He usually played the monster or bad guy since he was the scary-looking one of the two, but sometimes Lisa would join him in chasing the children when they least expected it. When they or the children got tired, they left the playground to sit on a bench and share a water bottle from their picnic basket.
They ate lunch a little after one. Both were flushed and tired from playing so much. They laid out the blanket that came with the basket and began eating cold-cut sandwiches, fruit, salad, and brownies. At one point, Lisa pulled out her cell phone and held it up to take his picture.
“What’re you doing?” He smiled.
“Capturing a memory,” she said and took the picture.
He laughed. “Why capturing?”
She smiled, but something in her smile caused him to become concerned. She seemed to notice and unexpectedly sat in his lap, her legs on either side of his so her knees brushed his hips. Her hands went to his shoulders, near his neck, and she stared into his eyes. His heart raced, and he felt his insides shift with the want of having her so close and to pull her closer still. Involuntarily, his breath drew in a little more ragged, and he had to fight down his excitement.
“Capture,” she said with quiet sincerity, “so these memories never fade, so we can always find them.”
His eyes went to her lips as his hands slid to her hips and tugged her closer. She leaned in as a hint of a smile played at her lips, then she kissed his forehead, causing his hands to clutch her tighter as he let out a sigh of pleasure. She looked down into his eyes and smiled when she saw the effect she had on him.


“You see?” she whispered. “I’ve already captured you.”

Interesting. Thanks for sharing

Melliane, an interesting looking book for sure!