Blodeuedd's Monday Review: A Blade so Black by LL McKinney 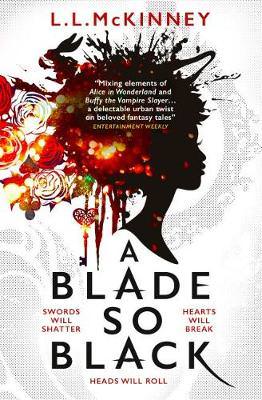 
My Thoughts:
Alice in Wonderland. Wonderland being that what Dreams is made of, nightmares and all kinds. And Alice being a teenager who is attacked by a nightmare and saved by Addison Hatter. Yes the Mad Hatter is just some 20 year old (who is immortal and older) and not mad at all, or attending tea parties. Instead he is a fighter that protects us little mortals.

Alice was a normal teen, who is now a superhero of sorts. Her mum was SO over protective. I mean I am all for a mother who is present in YA lit, so many are not. But this mum worried all the time. And yes I get it, we d hear about the black girl who was shot by cops while doing nothing at all. So of course Alice's mum wants her safe and sound at home. But how much was Alice really home? Maybe her mum was right to be mad. Can't have your kid running wild now can we. Honestly how did Buffy do it?

Addison, well he is mysterious and we learn more later. He is in exile and at the same time he has to protect the Wonderland/Earth border. And of course they will hook up some time, what else is an immortal guy for...yes I do wish he had been 20 for real instead.

The bad guy, oh I fear he was the down part of the book. It was all good until the bad guy showed up. He talked like a modern snotty teenager. He was all over Alice. It was frankly weird. Why is she so special? I wish he had been scary or evil. Not so meh.

Personally I wanted more, more of something. A stronger book.


Conclusion:
But it was an interesting story, and a different Alice. More will come as the ending was evil.

Blurb
The first time the Nightmares came, it nearly cost Alice her life. Now she's trained to battle monstrous creatures in the dark dream realm known as Wonderland with magic weapons and hardcore fighting skills. Yet even warriors have a curfew.

Life in real-world Atlanta isn't always so simple, as Alice juggles an overprotective mom, a high-maintenance best friend, and a slipping GPA. Keeping the Nightmares at bay is turning into a full-time job. But when Alice's handsome and mysterious mentor is poisoned, she has to find the antidote by venturing deeper into Wonderland than she’s ever gone before. And she'll need to use everything she's learned in both worlds to keep from losing her head . . . literally.

Damn that baddie for being badly written!