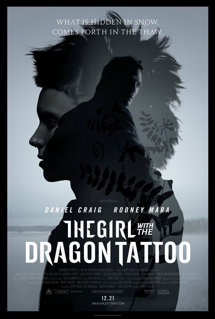 The story follows two characters, Mikael and Lisbeth, who come from two different worlds and are brought together for a common goal: solve the mystery of a girl who went missing forty years ago. Mikael is a journalist who's reputation is brought crashing down when he decided to try and bring down this man of power for corruption. He is approached by Henrik Vanger, a wealthy business man, who wants Mikael's help in finding his niece. Mikael then finds Lisbeth to help him solve this case. Lisbeth is an outcast and considered a "punk", however she is a pretty clever at computer hacking. Can these two misfits find the girl who's been presumed dead for forty years?

The cast was pretty amazing, by my standards. Even though I haven't read the book, I really liked who they casted for the roles. They had the talented Daniel Craig (Defiance, Munich) as Mikael, Rooney Mara (The Social Network, A Nightmare on Elm Street) as the outcast Lisbeth, Christopher Plummer (The Sound of Music, A Beautiful Mind) as Henrik Vanger, Robin Wright (The Princess Bride, Forrest Gump) as Erika, and many others.

Alright, this is WAY later than I originally planned to post this. I do highly apologize for me being a slacker. This semester is nearly done, so this little brain of mine should have more free-time. Huzzah! Anyways....

The first time I watched this was in Oklahoma with my cousin and her husband. I really enjoyed it the first time, even though I was sickly at the time. I watched it recently and I still really enjoyed it. Even though I knew how it was going to end, I was still on the edge of my seat! It's one of those mysteries that you can watch over and over and not really get bored of it. There's so much going and you can see and learn something new every time. It reminded me a little bit of Kiss the Girls with Morgan Freeman. One mystery that continues to please even though you watched it half a million times.

I sort of guessed the ending, but I was slightly wrong with motive and the details. I guess I'm magic, because I was surprised I was right-ish! It was a wild guess and I was sort-of right. However, it was a slight let down, *SPOILER* because she was alive and living under their noses the entire time. What the heck? She knew her uncle was looking for her and she couldn't drop a note to him and say, "Hey guess what! I'm alive! Oh by the way I ran away because I was being sexually abused by my father and brother!" C'mon it's been forty years and I'm pretty sure the Uncle would've helped her out." *SPOILER END* I'm glad I got that off my chest.

There are only two things that I weren't too keen on: 1) the beginning and 2) the end. The first 15 minutes were simply boring. No 'ifs' or 'buts'. Boring as all sin. The ending just irritated me a little, but I still adored it...so you can say I have a love-hate relationship with the ending. Ha.

Overall, it was a pretty good movie and I'll watch it again. I know my dad will get a kick out it, so I'll make him watch it with me someday. Even though the beginning was a little slow, don't miss out on the rest of the film, it surely does pick up! Also, just because I'm having conflicting feelings against the end...don't miss it. It'll have you on the edge of your seat! Out of five stars I grant this one 4 stars.

Would I re-watch?:
Meh...once the mystery was solved, it won't be as exciting.

My friend said the same thing about the beginning of the book--he couldn't get through it. Said all the politics made it boring to him.

Glad to hear your opinion on this movie! I'll have to check it out if I'm ever feeling up to it. ;) Either that or I'll try to read the book first.

Yeaaah I should have read the book first...but oh well. Yeah all the politics was slightly annoying and boring, but once that was out of the way all was fine.

If I would watch it I would watch the Swedish one as the accents I heard in the trailer drove me insane. Why talk with an accent? Makes no sense

I really want to watch that version too! Yeah, no, it makes no sense.