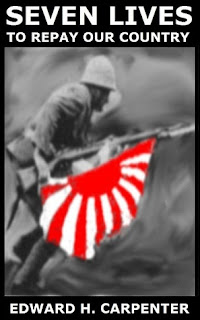 "The battle of Saipan pitted US Marines and Allied soldiers against the island's Japanese defenders in one of the bloodiest battles in the Pacific War. In this short story written by a US Marine, a pair of Japanese soldiers on Saipan confront the inevitability of defeat in different ways."

Like other short stories I read...I must give a warning to everyone...this is a short story, so the story will be short. I had to keep reminding myself too. Reviews for these tend to be a little hard, so I'll divide and conquer.

What I Liked:
I love this because it was in the Japanese POV. I love reading different POV especially during World War II. Being a granddaughter to two men who fought on the American side and being an avid fan of movies/books set in this time, I'm very exposed to the American POV. Being able to read the Japanese view in this short story made me happy. I wasn't expected it, even though there is a huge flag on the cover (I'm not the smartest at times). The characters were wonderful. In the short amount of time, I feel like Edward Carpenter did a wonderful job presenting them and their stories!

Also, I loved how Edward Carpenter went beyond the stereotype and should these men for who they really were. He should that they, like Americans, have a fear of death and not seeing their loved ones. He showed them as the humans they were.

What I Didn't Like:
I wish it was longer and more in depth! I wish I did get to know the characters more and the location more. However, it was short story and thus I'm left with what I am left with. Also, I was bitter about how pretty much every character met their defeat in some way, shape, or form. Yes, I know my history, but it still makes me mad.

Conclusion:
Great short story. Even though I wished it was longer, I still have a high love for this story and stories like it. It reminded me of 'Letters From Iwo Jima', one of my favorite movies/books of all time. I look forward to reading more of Edward H. Carpenter's stories. Maybe he would make a long version of this story. ^.^ Anyways...I would recommend this to those that love war-type novels and a good short story. Out of five stars, I grant this one 5 stars.

I guess it's a good thing when the only thing you didn't like was that it's too short. Sounds like it would have made for a great novel.

I am glad that you enjoyed it .)

Anna, yeah. That's why I had to give it 5 stars. :) It would have been a fantastic novel.

B, me too! I was hoping I wouldn't be disappointed.