(For some reason blogger hates me...this didn't automatically post last night and I had to work nearly 12 hours today, sooooo yeaaa. I apologize to CMN and the author of this book.) 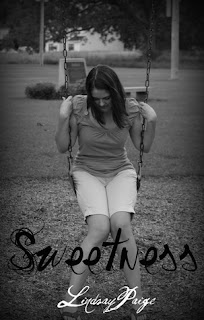 Title: Sweetness (Bold as Love#1)Genre: YA, Fiction, Romance, DramaPages: e-book
First Published: November 11th, 2011Where I Got It: Given me to read and review from Charisma Media Network for my honest opinion


"Emily wished she was invisible. But after moving to a new town with her dad, a charming boy makes it impossible for her to disappear. Despite her feelings of unworthiness, Emily soon finds herself drawn to the safety of Jake's world.
Good looking and the star of the hockey team, Jake has a lot going for him. What most people don't see is the difficult life he has at home. When quiet Emily steals his heart, Jake vows to help her discover she is worthy of love. Just when the two of them realize the sweetness of their relationship, they are put to the test. Only together can they overcome their haunted pasts to fight for a future together."

Like I earlier stated, I read this for CMN to give my honest opinion. This is the first book I've read by Lindsay Paige and it is also the first book of the series.

At first I was little unsure how I would take to this book. Usually I don't read YA novels, but I took a chance with this one and the second one (which I'll be reading soon). Why? Well, I'm a sucker for guys who play hockey or baseball. How many books have you read that the hero is a hockey or baseball player? Not many! When I read that Jake (the hero) was a hockey player I was giggled like a pre-teen and put my name into read this. I also really wanted to see if Lindsay Paige could make this very unlikely romance seem legit or if it would be cheesy like many YA romances are.

To put it simple: I was not let down. I was drawn to Emily's and Jake's story. I can't say that I can connect with these characters on the same level as these two, but I understand. It's hard to explain, but I really was intrigued. They both had pretty bad experiences in their past and they suffer in silence until they find one another. I found it very sweet and I was highly jealous of Emily. Jake, even though classified as a popular guy, was a wonderful person. I love how he was so dedicated to help Emily and bring her back to life after such horrid experiences with her mother being a (sorry for the French) bitch and the guys her mom hired to pretty much rape her. Poor girl. However, I love how Emily stood by her man even though he blamed himself for his mother's death.

Perhaps the reason why Jake was drawn to Emily was the fact that she was his redemption. He would save her, because he wasn't there to save his mom. It's just so...sweet. I loved it. Perhaps that is why Lindsay Paige named the book Sweetness. Hmmmm.

The only thing that realllllllllly bugged me was how the book was written. It was written in present tense and at times I felt like I was reading diary entries. I don't mind it, but it was slightly irritating at times. Am I being too picky or have I become highly use to past tense novels? I don't know, but that was the only thing that irked me. Other than that, I adored this book.

Sweetness was a sweet book and its a good book to read while your laying by the pool or chilling on the beach. I can't wait to start the second book in this series. I would recommend this to those that need a nice, sweet book or for those that LOVE YA novels. It's one the best YA novels I've read in a long time. Out of five stars I grant this one 4 stars.

I have had that happen to me too so after that I did not dare to schedule any more :/

yeaaaa I usually avoid that, but I wasn't going to be near a computer that day sooooo I tried, but it let me down