Blodeuedd's Monday Review: The Girl From the Channel Islands by Jenny Lecoat 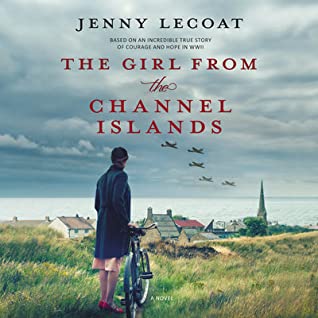 The book is inspired by the true story of Hedwig Bercu.

Edit: The book has other names by other imprints if you have come across it.

Hedy managed to escape Austria, her siblings scattering in the wind, her parents leaving behind, and she coming to Jersey. And she is still there when the Germans invade. Not the best place for a Jewish woman. I liked Hedy, what was there not to like. To survive she even had to go work for the Germans, knowing very well what they felt about Jews.

There is romance, since she starts seeing a German soldier, and even this is true. He helps her out with food and more when she has to go into hiding. In the book she is torn, he is a German soldier! But sometimes people just fall in love.

The book touches, but does not delve into the whole jerrybag issue. Dorothea is an islander who marries an Austrian baker, who is then conscripted. Her family stops talking to her, and others see her as scum. But since this is not her book we do not really see how tough that has to be for her. Instead she is the hopeful one who later hides Hedy in her house.

Yes I googled her life to see if I had to cry at the end...But I still was on edge and wanted to see what would happen!

I might have known, but have long forgotten, that over 5000 Brits were deported from the Channel Islands and sent to camps. Just cos they were not Channel born, but mainland born. And the UK government seemed to not care. The islands could not be protected, every man for himself. And those left behind were left to starve.

I enjoyed this one.

Great narration. She did had to do accents and I felt they were good, distinct voices and you could feel the utter exhaustion in Hedy's voice,

Inspired by the true story of a young Jewish girl - Hedy Bercu - who fled to Jersey from Vienna only to find herself trapped on the island during the German occupation.

In June 1940, the horror-struck inhabitants of Jersey watch as the German army unopposed takes possession of their island. Now only a short way from the English coast, the Germans plan their invasion. Hedy Bercu, a young Jewish girl from Vienna who fled to the isolation and safety of Jersey two years earlier to escape the Nazis, finds herself once more trapped, but this time with no way of escape.

Hiding her racial status, Hedy is employed by the German authorities and secretly embarks on small acts of resistance. But most dangerously of all, she falls in love with German lieutenant Kurt Neumann -- a relationship on which her life will soon depend.