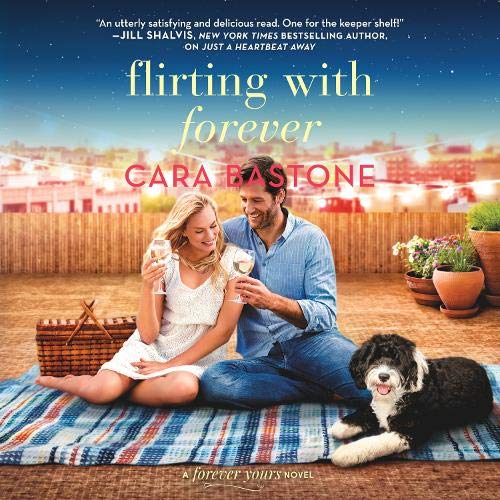 I had a slow start when I accidentally missed something, so a few weeks later I went back and perfect. Though, like some have mentioned, why is there a dog on the cover? He has a cat btw.

Mary is 37, loving life, she has her own shop, good friends (though she does have this really horrid judgmental mother who is all you are 37! You will die alone!).

John works and works, he is also seen as aloof, cold, judgy. But he really is none of those things.

They go on a blind date, things goes horrible, John blurts out the worst thing ever. But they run into each other, time after time, become friends. And omg, never gets that they totally both want each other. He thinks she is too posh for him, she thinks he believes she is too old for him.

It was fun, cute, even if I did want to shout at them to just do something! But after that first date, who could blame them.

Good narrator, I felt she got the voices done well and she had a good range.

Mary Trace is bright, bubbly and suddenly dunked back into the dating pool in her mid-thirties. She owns a successful boutique in a trendy Brooklyn neighborhood. But all of her closest friends are falling in love (with each other), and Mary refuses to feel like she's missing out on romance. So she starts saying yes to opportunities--and to dates.

When Mary goes on a blind date set up by a friend, her heart drops when she meets the perfectly gorgeous, and extremely well-groomed John Modesto-Whitford. There's not a hair out of place, and he's got the judgmental expression to match. When he drops a less-than-flattering comment about Mary's age, she's out of there.

John, desperate not to be anything like his lying snake of a father, prides himself on being honest to a fault. Though he always tells the truth, he has learned that sometimes it's best just to keep his trap shut. So why oh why does he tell the most gorgeous woman he's ever had the honor of having dinner with that she's...old?

He called her old on a first date? Yikes! Glad they got a few more chances for him to fix that.

Mel,
Yes, why is there a random dog?

Carole
So weird, I know like oh romance? Let's put a dog there but still

Sophia
He did not mean it like that, but yes, omg foot in mouth