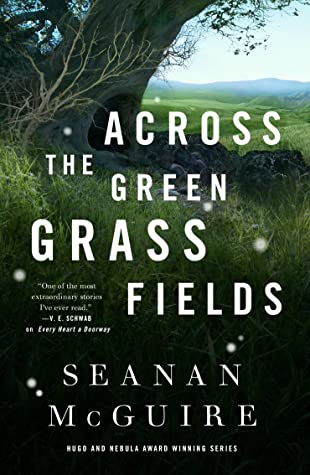 It was good, like the rest of the series, but it felt like it missed some magic. Maybe cos we didn't visit the school at all?.

Regan goes through a door to a land of centaurs, kelpies, unicorns and more. A land that says a human is there to save or doom them.

But yes not a lot happens in a way, she meets some centaurs, she befriends them (I still wonder about male centaurs, like what do they do? Sit around and spend money?) And then she must save the land, and well, the door always comes back....

I liked it, but yes it did lack some magic and explanations.

Regan loves, and is loved, though her school-friend situation has become complicated, of late.

When she suddenly finds herself thrust through a doorway that asks her to "Be Sure" before swallowing her whole, Regan must learn to live in a world filled with centaurs, kelpies, and other magical equines―a world that expects its human visitors to step up and be heroes.

But after embracing her time with the herd, Regan discovers that not all forms of heroism are equal, and not all quests are as they seem…

*waves*
I started watching our movie and and can't concentrate;)

I really must read more by this author. I see the name everywhereeee.

Hoping to start this series at some point. Bummer this one wasn't as magical.