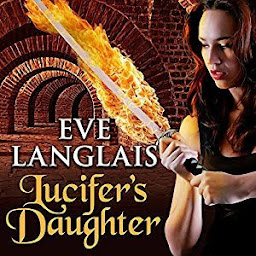 I meant to try this for ages, but then I got to try the audiobook and was in at once.

Muriel is the devil's daughter, and hey the devil seems really nice. At least around her. He seemed like a big weird softie. And he was very disappointed by her lack of sinning. Because Muriel wants to wait for love, and is not into the whole spread evil thing. Though neither does anyone else, hell seems to be more like, sin is good, but humans can do it on their own. But yes of course there are temptations out there to get them to come to the right side.And actual hell sounds good too, if you are not Stalin or someone, the normal sinners are just there.

I got off track, but it was a fun world, the devil was really nice. Muriel was nice. There is humour, some slaying of evil dudes, cute hellbeasts. And of course the romance. I am not big on insta, but it works, this woman has waited for 23 years to get her groove on. For a normal woman that would be ok, but for someone who was always bombarded by her weird family to get her freak on. No wonder she wanted to wait for the one. And in comes Dark tall and mysterious. Lust at once, romance at once, though there is this time where I wanted to kick him, grrrr, that you even thought that man!

A good narrator, I have listened to her before and she sits well in this book. It works great in audio, you really get the fun of things

It drives my dad nuts I'm such a goody-two-shoes, but the fact that I'm a virgin makes smoke pour from his ears. See, I'm determined to save myself for love, but daddy dear, more commonly known as Lucifer, just wants me to stop being an embarrassment. Would it kill you to sin a little? Maybe he'll get his wish, because I met an intriguing hunk last night in my bar. Could he be the one? He certainly melts my panties like marshmallows over the coals of Hell, but do I dare trust him? My last boyfriend thought he'd gain infamy by killing me. He's infamous all right. Dad had him mounted on a wall, his version of modern art titled, "Touch my baby girl and die." My love life isn't the only thing I've got to worry about. There's someone threatening the denizens of Hell, and while my daddy says to not worry my pretty little head about it, I am involved because whoever is behind the attacks keeps coming after me. Bring it. I'm not afraid.

One day I'll have to try this author

I am super intrigued.

Carole
It is really fun, though book 2 is just smex

I've read her Welcome to Hell series with Lucifer at the center- hiliarious- though I still need to read these. Sounds like more Eve Langlais fun.