Blodeuedd's Monday Review: How to Catch A Queen by Alyssa Cole 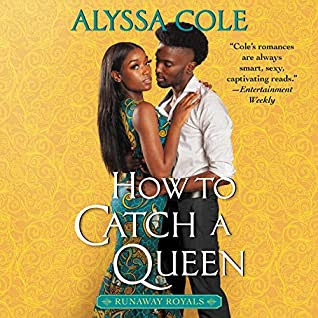 Arranged marriage story! A woman who really wants to be queen!

Shanti has prepared all her life to be queen, ok yes I admit, a tad weird, I mean how many chances are there in the world to achieve that, but hey this is a romance so a lot more pretend kingdoms. I did not know how to take this ambition of hers, but then, I mean she really went all in for it. She studied, she mastered everything and when she finally got her chance she started to plan how to help her new country.

But then she finally gets a chance and gets to speak to her husband. And he notices her brilliant mind (oh and how fine she is.)

Sanyu, yes i liked him. Not everyone wants to be king and his dad, and their advisor sure did a number on him. First, all those queens, so never any mother for him. An advisor ho kept telling him he was a failure, and a father who was known for his iron fist. This poor guy pops antacids like they are candy. But it felt so real, hell it would be scary to be king and suddenly must know what to do.

And no one told him he was to marry either so resentment there too.

She is the only queen ready to save this country, and together they could be great. But there is a road there and yes some drama on the way. It is fun, it makes you want to smack someone over the head and it felt new. I have sure never read about someone this driven to be queen!

I remember the couple for an earlier book and wanting to read it, and I finally had the chance. Enjoyable and refreshing.

Great narration by Chilton. She gets to portray characters from two made up kingdoms, and she gives the characters different accents so well. She has a nice range with her male and female voices and she truly brings the story together.

When Shanti Mohapi weds the king of Njaza, her dream of becoming a queen finally comes true. But it’s nothing like she imagined. Shanti and her husband may share an immediate and powerful attraction, but her subjects see her as an outsider, and everything she was taught about being the perfect wife goes disastrously wrong.

A king must rule with an iron fist, and newly crowned King Sanyu was born perfectly fitted for the gauntlet, even if he wishes he weren’t. He agrees to take a wife as is required of him, though he doesn’t expect to actually fall in love. Even more vexing? His beguiling new queen seems to have the answers to his country’s problems - except no one will listen to her.

By day, they lead separate lives. By night, she wears the crown, and he bows to her demands in matters of politics and passion. When turmoil erupts in their kingdom and their marriage, Shanti goes on the run, and Sanyu must learn whether he has what it takes both to lead his people and to catch his queen.

I love this author!

She is so good :D

She sounds so driven too bad everyone isn't excited for her. I've read this author's historicals and at some point I need to read this royal romance series.

It's an author I really want to try!