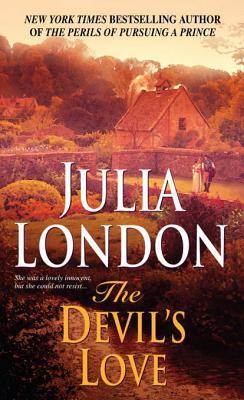 Author: Julia London
Narrator: Anne Flosnik
Title: The Devil's Love (The Rogues of Regent Street, Book 1)
Genre: Historical Romance
Format: Audiobook
Pages: 400
Published:   November 10th 1998
Where I got It: Audible
Summary:
A woman's desire...
With dreams of a great romantic love, Abigail Carrington sails to England to marry the man she has loved since childhood, Michael Ingram, Marquis of Darfield. She believes her betrothed is a generous and noble man who has been longing for her. But the handsome man waiting for her at the altar is a dark, brooding stranger who rushes her into marriage, then abandons her at his country estate. Only the passion of Michael's kiss gives her hope that theirs can be more than a marriage of convenience.
A man's need...
With scandal shadowing his past, Michael, the Devil of Darfield, had no need for a wife. Remembering only the little hellion who made life miserable for him aboard her father's ship, he resents the agreement he made to marry her so he could save his ancestral home. Though determined to ignore her, he cannot stop thinking about his lovely violet-eyed bride. Her beauty tempts him. Her charm bedevils him. He tries to drive her away until he almost loses her. Then he vows to regain her love—before it is too late....
Review:
I've enjoyed this author's book last year and I found this randomly, so why not?
The story follows Abby and Michael. Abby had been in love with Michael since her childhood. When her father dies, she sails to England to finally reunite with him and marry him. She grew being told that Michael was her betrothed and he was waiting for her for many years. The time comes for them to get married when Abby's father passes and she is old enough. When she arrives she is reintroduced to Michael who is anything but a man in love and excited to marry her. He rushes her to the alter and leaves the estate as quickly as he can. Michael, aka the Devil of Darfield, has no need or want of a wife especially this girl who was a hellion back in the day when he worked for her father on his ship. He resents the fact he HAS to marry her in order to save his ancestral home. Even though he wants nothing to do with her...he can't stop thinking about her.
What a big ol' pickle for the two of them. They both were victims of Abby's father. He for sure manipulated both of them. Abby grew up thinking Michael loved her too and couldn't wait until she was old enough and ready to marry. While Michael was shackled into marrying her because of a contract. Poor things.
Even though I felt bad for Michael I wanted to hit him. Yes. He was a total ASS. I get he thought she was part of the trickery from that old man, but good lord you can tell she wasn't! She just wanted to be loved and she was equally lied to.
I did love Michael's friend Sam. I hope he gets an HEA! He was adorable. A part of me wanted Abby to run away with Sam ;)
The ending was good and I'm glad Michael had to REALLY earn her back because he was an ass. Sure...again....I get his distrust because he has been tricked and used SO much over the years BUT she LOVES you man!!!! GAH.
The narrator was new to me. I adored her voices. She really fit the bill and I enjoyed her! Her changing accents was flawless.
Overall, I really did enjoy this even though I wanted to smack Michael. I just wanted them to finally get their HEA. They both deserved it, but I am glad Abby didn't forgive Michael at the end there (I would have been livid). He had to really work for it and pray she would love him again. I am slightly curious about book 2. We'll see. I do not think it is about Sam so I'm not crazy interested. LOL I just want Sam to be happy next. I'll give this 4 stars. Not a bad way to start the year!
Challenge(s):
- #1 for Audiobook challenge
- #1 for Romance Bingo

ANother ass I see, but they do learn ;)

Took this ass a long time. BUT they always learn