Audiobook Review: Seduce Me in Dreams by Jacquelyn Frank 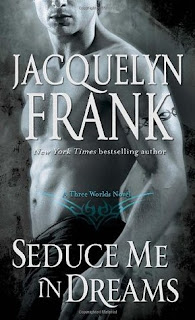 Author: Jacquelyn Frank
Narrator: Coleen Marlo
Title: Seduce Me in Dreams
(Three Worlds #1)
Genre: SciFi, Fantasy, Paranormal, Romance
Format: Audiobook
Published: March 1st 2011
Where I got It: My shelf (audible)
Summary: Dark. Mysterious. Sensual. When Bronse Chapel, the commander of a specialized unit of the Interplanetary Militia, begins to dream about a beautiful and exotic brunette, he wants to dismiss it as being induced by lack of sleep ... or perhaps lack of sex. But his instincts tell him it's something different, something far more dangerous.
Ravenna is the leader of the Chosen Ones, a small group of people from her village born with extraordinary powers. She doesn't know what draws her to Bronse's dreams night after night, but she senses that he and his team are in jeopardy. Ravenna can help him, but first Bronse must save the Chosen Ones from those who plan to use their powers for evil. Together, Bronse and Ravenna will be unstoppable. But Ravenna is hiding something that could endanger them all
Review:
Honestly...I do not remember the last SciFi romance I've read/listened to? Mmmm *wrecks my brain*. Have I EVER read SciFi romance??????????? I do not remember. Yesss I have read plenty of SciFi normal (some may have a small element) but yea....I cannot think of one.
The story follows Bronse Chapel who is the commander of a specialized unit of the Interplanetary Militia. He starts dreaming of a beautiful and exotic woman who is haunting him during his waking day. Little does he know this woman is real. It is Ravenna who is the leader of a small group of people from her village that are born with powers. They are called the Chosen Ones. She doesn't know what draws her to Bronse's dreams night after night, but she knows something will happen to his team so she tries to help him and warn him of the dangers ahead.
The first 75% of the book I simply could NOT stop listening too. I had to know what was going to happen next. I liked Bronse and I liked Ravenna. It took an eon for him to finally save her and get to her, but it was worth it when they found each other. Not under GREAT conditions, but they really earned each other and helped each other out.
Now...the last 25% dragged a bit. I zonked out twice. We had fast-paced and then it slowed down quite a bit comparatively. But I was happy they found their HEA and whatnot.
The narrator was new to me and she did well. I like her guy voices. She did try to make them all different and I appreciate that. Some were similar, but overall I applaud her performance.
In the end, I am unsure if I will continue to book 2. We shall see. I enjoyed this for what it was and I liked their journey and I huzzahed when he finally found her! The last 25% was not as good though. It slowed down too much for compared to fast-pace and action of the beginning. Overall, I'll give this a 3.

I feel the sci.fi romance I have read have been more sci.fi than romance, hmm

I highly recommend the Consortium Rebellion series by Jessie Mihalik, Narrated by Emily Woo Zeller . That is a wonderful sci-fi romance series!

B, I'll have to read more so I can compare.

Jen, oooo I'll check them out! Thanks!

I definitely need to add this series to my list. Good to know the end wasn't that crisp.