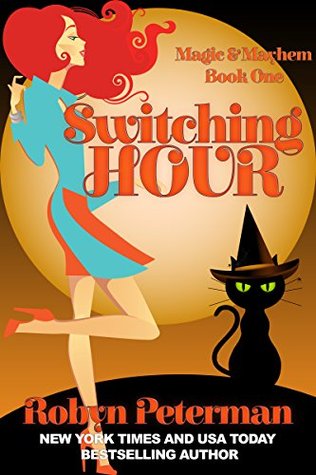 Summary: Released from the magic pokey and paroled with limited power is enough to make any witch grumpy.
However, if you throw in a recently resurrected cat, a lime-green Kia and a sexy egotistical werewolf, it’s enough to make a gal fly off the edge.
Not to mention a mission…with no freaking directions.
So here I sit in Asscrack, West Virginia trying to figure out how to complete my mysterious mission before All Hallows Eve when I’ll get turned into a mortal.
The animals in the area are convinced I’m the Shifter Whisperer (whatever the hell that is) and the hotter-than- asphalt-in-August werewolf thinks I’m his mate.
Now apparently I’m slated to save a bunch of hairy freaks of nature?
If they think I’m the right witch for the job, they’ve swallowed some bad brew.
Review:
It's fall time! So I am dusting off some Halloween/Fall-y books. Yayy!
We follow Zelda who is released from prison on parole with limited magic. She is given a mission to prove herself that she has changed from the selfish woman/witch she used to be. Along with her recently resurrected cat and a sexy egotistical werewolf, can she solve the mystery and fill her Aunt's shoes?
This was amusing. It kept me chuckling. I liked Zelda even though she wasn't the nicest witch. She's not evil...but super superficial and selfish. It was refreshing!
Her cat was creepy, but funny.
The werewolf was okay....but meh. I could've done without him. I think the "romance" was a little awkward and it happened really quick. The love isn't there yet, but there is the lust and the fact that she is his fated mate so it felt like none of them had a choice. I'm glad Zelda is making him court her before she really agrees to anything. Kuddos to her for that.
The big ol' twist was for shocking. I am on the fence with how I feel. Maybe I'll be more settled with this reveal in book 2 if I read it (which I am tempted).
Overall, I did enjoy this. It was funny and quick. Not amazing, but it was fun. I'll give this 3 stars.

I only tried one or 2 books by this author

Romance for the sake of romance