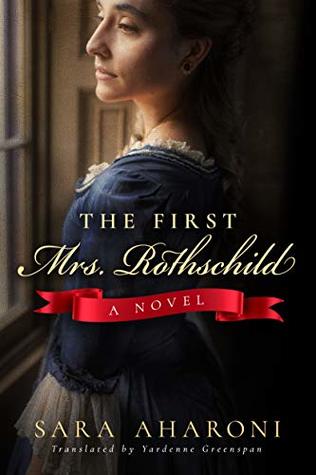 Summary: It is the turn of the eighteenth century in Frankfurt, Germany, and young Gutle and Meir Amschel Rothschild struggle to establish themselves in the cramped and restricted Judengasse. But when Meir’s talents as a novice banker catch the attention of a German prince, Meir is suddenly afforded entrée into the European world of finance and nobility, and the Rothschilds’ lives are changed forever. As proud as Gutle is of her husband’s success, she is also cautious—very much aware of the fact that her husband’s rise is tied to his patrons’ willingness to “see past” his Jewishness. As their family grows, and a dream of fortune comes true, so does their belief that money will ultimately bring the power needed to establish Jewish civil rights.
Told through Gutle’s intimate journals, revealed across decades—from the French Revolution through personal tragedies and triumphs


Review:
Finally reading this one. It has been on my virtual Kindle shelf for a million years.
We follow Gutle who is a young Jewish woman in Frankfurt, Germany during the turn of the eighteenth century. She marries Meir Amschel Rothschild who wants more than life in Judengasee. After catching the eye of a German prince, Meir and Gutle find themselves in a whole new world and new dangers.
The story is told all in journal formatting which usually excites me. I love that intimate connection with characters! However....I didn't connect with Gutle like I wanted to. Maybe it was her? Maybe it was me? But...she....was boring. Gah. That is so harsh of me I know! However, I was more curious about her hubby and her children. I felt like she was a school teacher lecturing (especially as we got further along in the story). It didn't feel natural or like she was writing her true thoughts all the time. We had glimpses here and there, but I felt like she didn't want to let her emotions run freely.
The story itself was okay and it was fun seeing them rise. They are good people and he worked really hard to get everything! I cheered. But....that connection was lost for me. Maybe if it was his journal or if it was just told like a normal story - ie 1st person or something.
I will admit...I skimmed a lot especially in the middle and near the end. There were so many times I just wanted to walk away and be done...but I pushed forward because I was curious to see what this family had in store for them. Plus there are so few stories set in the Jewish POV. I wanted to learn and see so I kept reading and finished this. Again...maybe I would've felt more with a different POV or story format.
Overall, I wish I had liked this more. It felt more like a lecture sometimes rather than intimate thoughts of a young girl who becomes a wife, mother, grandmother, and so on. I'll give this 2 stars.

Too bad! I was curious about this one because one hears of this family a lot in historicals. But, if the main character is blah, it's a tough haul even if the rest of the story is interesting.

Interesting, but yes, too bad about the final thing

Well, at least it's not on your TBR anymore!

Sophia, yesss I was curious too.

B, a very interesting one. But gah.