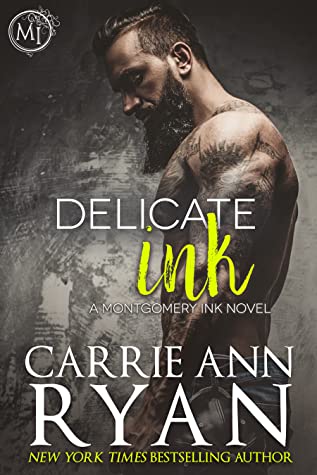 Author: Carrie Ann Ryan
Narrator: Gregory Salinas
Title: Delicate Ink
(Montgomery Ink #1)
Genre: Romance, Contemporary, Erotica
Format: Audiobook
Published: October 14th 2014
Where I got It: My shelf (audible)
Summary: One look at the woman who comes in for new ink and Austin Montgomery knows she’s the one for him. The problem: she can’t stand him. Now he’ll have to be his most charming and brooding if he has any chance of changing her mind…and claiming her heart.
Sierra Elder has reasons for keeping away and secrets close to her heart. An accident took her first love and scarred more than her soul in the process. Now the inked man with a wicked grin is starting to melt the ice she’s built to keep her safe, but the danger isn’t only from what she feels.
Some secrets were never meant to be kept and when mistakes from both of their pasts come knocking, they’ll have to trust each other, even if it could hurt them both in the process.
Review:
I mainly grabbed this one because I want to be good and read the books in order. There is one a little later down in the series I want to read....so I'm trying to be better at starting at book 1. ;)
We follow Austin Montgomery and Sierra Elder. Austin is nearing 40  and is starting to realize he needs to maybe settle down and maybe find someone who can make him happy. Walks in Sierra who he has been slightly attracted too but she cannot stand him. It will take some work, but maybe he can win her over. Sierra has her reasons for wanting to stay away even though she lusts after Austin. She has a lot of secrets and past hurts that she is scared to share. However, some secrets are never meant to be hidden and mistakes from the past has a funny way of coming back.
Oh Austin...oh Sierra. Both really, really dense. For smart individuals who can manage successful businesses...they are really dumb sometimes. Especially near the end. SIGHS....they need a kick in the romp. I liked them though and they were good for each other.
There is BDSM here which is normally not something I lean to in romances. However, it was done really well. He is the dom and she is the sub, but mainly in the bedroom. They are equals in real life. I have a hard time with dom/sub relationships that leak into the real life situations and the dom takes ALL control and makes ALL the decisions. NO. That person is an adult and has the right to do what they will. GAH. But yes - I am happy with how this was done.
Warning...there are a LOT of BDSM smexy scenes. I did fast forward through some of them especially near the end. I was much more interested in the story and I was itching to see things get resolved LOL! Even though Austin and Sierra get together and become a couple quickly.....it does take a lot of time for them to fully trust each other and admit their feelings.
There are a couple of sideline stories that happen as well. In the end...I did grow to like them. But it felt very jarring at first. It seemed to ruin the flow a little bit. I felt like they could've had their own book or short story or something...IDK. It just didn't work at first. Like I said...I grew to like them and be interested in their stories and problems, but I wanted to mainly focus on our main couple in this one especially since they already have enough drama/issues to fight through.
Now the narrator.......I liked him a lot. His girl voices were okay. Not amazing, but it worked well and each girl had slight differences so I was content.
Overall, I enjoyed this. I did not like the side stories at first because it felt a little jarring for me. Yes, I did grow to like them and be intrigued, buuuuut they could've just had their own book or short story. I liked Austin and Sierra a lot and I liked how their BDSM relationship was showcased. It felt natural and real. Yes, he is alpha...but Sierra is his equal - not his property. I'll give this a 3.

I would def fast forward too :D Get to the story peeps!

RIGHT!? Like c'mon! I wanna see the good story stuff!