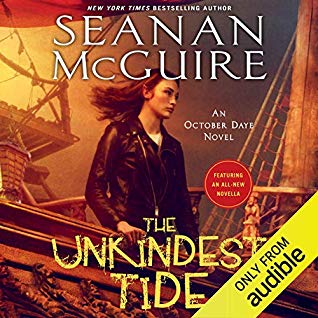 My first Toby in audio! And omg, yes it worked great! I did feel like the last book was a filler, but this one was great, was it the audio? Maybe, or maybe because things started to happen again.

The Sea witch are calling all selkies to a final judgement, and in the last book Toby's daughter became one. So stakes are high.

Let's get back to the audio thing. I really enjoyed Robinette's narration. I might not have been the fondest of Tybalt, but then I guess I pictured him in another way (sexier *cough*) and now he was just so old timey, but hey I even grew to like it, because it is Tybalt after all. And the Luideag was very rough sounding, but still she almost brought tears to my eyes at one point. She put in so much emotion. All the feels. And Toby was just right. SO yes, great narration.

Back to the story. The selkies are scared. Duchess Dianda is in trouble when her brother comes sniffing around. Toby is in danger, as always (and omg, poor Toby!). I am disliking her daughter now, I get it, sure be angry, but Gillian is just cruel, so cruel.

A lot is happening and I could not stop listening. I have no idea how many hours I listened to today, it was a lot I tell you. A lot! I will definitely do the next on in audio. Everything is even greater in audio.

Hundreds of years ago, the Selkies made a deal with the sea witch: they would have the sea for as long as she allowed it, and when the time came, she would call in all their debts at once. Many people assumed that day would never come. Those people were wrong.

When the Luidaeg—October "Toby" Daye's oldest and most dangerous ally—tells her the time has come for the Selkies to fulfill their side of the bargain, and that Toby must be a part of the process, Toby can't refuse. Literally. The Selkies aren't the only ones in debt to the Luidaeg, and Toby has to pay what she owes like anyone else. They will travel to the fabled Duchy of Ships and call a convocation of the Selkies, telling them to come and meet the Luidaeg's price...or face the consequences.

Of course, nothing is that simple. When Dianda Lorden's brother appears to arrest Dianda for treason against the Undersea, when a Selkie woman is stripped of her skin and then murdered, when everything is falling apart, that's when Toby will have to answer the real question of the hour.
Written By Carole Rae at 6:30 PM

I always have a great a time with this series!

Carole
Toby is the greatest!

This is a series that I have had on my list forever. Sometimes children can be real snots to their parents. Yay for a fab narrator.