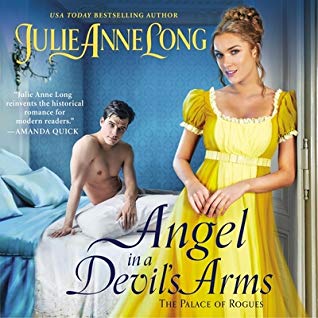 
For a book with someone back fromt the dead, I expected more drama, but hey I am not complaining.

Angelique used to be a mistress, now she runs a boarding house with the wife of the man whose mistress she was. Yes, I had a rocky start with her, but she is a good person, and that guy was an asshat anyway.

I like the boarding house, with its funny boarders, and rules.

And to the drama, or non drama. Lucien was assumed dead for 10 years (as someone did try to kill him), and now he wants revenge. Instead he falls in love. And well Lucien was just a really good guy, he tried at revenge, but hey he is a lover not a fighter.

And then they live happily ever after. A sweet story, without drama.

Narration
If you had not noticed, I am a Justine Eyre fan. I really appreciate her historical romance narrations. Her voice fits well for the era, and she does a great job with male and female voices. I like listening to her.


He has devil's blood in his veins. At least, that's always been the legend. How else could the Duke of Brexford's notorious bastard son return from the dead? The brutal decade since Lucien Durand, Lord Bolt, allegedly drowned in the Thames forged him into a man who always gets what--and who--he wants. And what he wants is vengeance for his stolen birthright . . . and one wild night in Angelique Breedlove's bed.

Angelique recognizes heartbreak when the enigmatic Lord Bolt walks into The Grand Palace on the Thames, and not even his devastating charm can tempt her to risk her own ever again. One scorching kiss drives home the danger.

But in the space between them springs a trust that feels anything but safe. And the passion--explosive, consuming--drives Lucien to his knees. Now his whole life depends on proving his love to a woman who doesn't believe in it . . . because his true birthright, he now knows, is guardian of Angelique Breedlove's heart.
Written By Carole Rae at 6:30 PM

I'm a Justine Eyre fan, too.

LOL, I would expect a bit of drama from a guy back from the dead and a revenge plot, too. Still, sounds like a fun one.

Sophia,
Right! He is all revenge! And then he is all awwww I am in love, no man, REVENGE

LOL lover not fighter. Love it