Blodeuedd's Monday Review: Thirteen Doorways Wolves Behind Them All by Laura Ruby 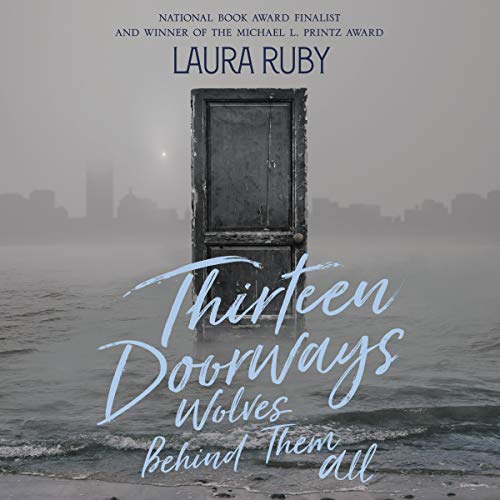 I read this blurb (not this one), and expected something entirely else. More horror in the orphanage, so ok, it was not a walk on roses, but I thought it would be worse. Now there were even good times.

Frankie and Toni is left at an orphanage by their father. He has a new wife (asshat!), and no place in his home for them. They grow up there and he visits twice a month, until he does not. His new wife was a piece of work.

Frankie is the sensible one that tries to be good.
Toni is the one that likes to flirt with the boys, even though they are not allowed too.

And then there was the ghost, ok so this was really weird. At first I was more interested in Frankie's story, but then there ghost took more and more space and I liked her more. A young woman hanging around, wondering why, whispering to orphans and slowly we learn her story. And it is a sad one.

Narration
I liked her ghost voice for Pearl, it fitted great.
The ghost part had this other feel to them and that did work great for the story. It felt more ghostly.

When Frankie’s mother died and her father left her and her siblings at an orphanage in Chicago, it was supposed to be only temporary - just long enough for him to get back on his feet and be able to provide for them once again. That’s why Frankie's not prepared for the day that he arrives for his weekend visit with a new woman on his arm and out-of-state train tickets in his pocket.

Now, Frankie and her sister, Toni, are abandoned alongside so many other orphans - two young, unwanted women doing everything they can to survive.

And as the embers of the Great Depression are kindled into the fires of World War II, and the shadows of injustice, poverty, and death walk the streets in broad daylight, it will be up to Frankie to find something worth holding on to in the ruins of this shattered America - every minute of every day spent wondering if the life she's able to carve out will be enough.

I will admit I do not know the answer. But I will be watching, waiting to find out.

That’s what ghosts do.
Written By Carole Rae at 6:30 PM

Email ThisBlogThis!Share to TwitterShare to FacebookShare to Pinterest
Labels: B's Mondays, Blodeuedd, Laura Ruby, Thirteen Doorways Wolves Behind Them All

Mel,
It was different for sure

The ghost is an interesting touch. My heart already breaks for the girls to get abandoned like that, but I know it happens.