Blodeuedd's Monday Review: The Only Woman in the Room by Marie Benedict 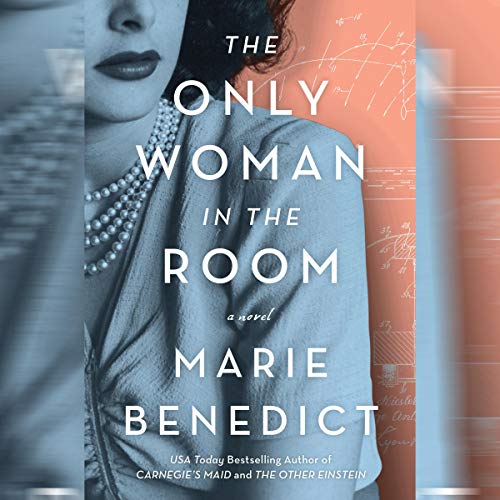 My Thoughts
The book is in two parts. Before Hollywood and Hollywood. I did like the before bits a lot more, Hollywood was good too, but the more I think about it, the more i think I know why. See this is a fictionalized story of Hedy Lamarr. The bones are there and the things we know, but not everything was known about her Austria days and I felt that the author embraced that more then and let her pen fly. And then when we came to Hollywood there was so much she wanted to talk about that we know happened. Like what a meat market Hollywood was which she surely wanted to talk about cos of MeToo. And how Hedy worries about war, and then war comes so she worries about Jews. And on top of that she is making so many movies and they are all mentioned. Plus her inventions. See, there was just so much going on there. Still good, but I really liked the drama of the first part.

Part one. Hedwig Kleiser, Jewish, even if she does not think of her that way, she is Austrian after all. Actress and now celebrated in the stage production of Sisi. She is 19 an a whirlwind. I liked her from page 1. Then then drama starts, a rich older man wants her and she obeys. This is Austria in the 30s after all. Her father knows trouble is coming and the third richest man in Austria might just protect her and them then. He is a controlling man who just wants pretty armcandy to show his friends.

And this part was exciting. A husband she grew to fear more and more. Tensions rising in Austria. Her husband being part of the Austrian political elite. It was this whole other life I did not know she had had.

Then comes Hollywood. I did feel she suffered a bit too much from survivors guilt. She went on and on how she could have saved the Jews of Austria. I think not.

And the thrilling part how freaking smart she was. I wish the author had showed more of that in her earlier years. It was like she suddenly was a genius. I mean she invented something that now was a forerunner to bluetooth, wifi, gps (and the military swept that under the rug, aholes.)

Conclusion
That is why I really enjoyed this book. What a fascinating woman! Everyone should read it and see for themselves.

Narrator
I liked her narration because it felt like it was an older Hedy talking. It brought you really close into the story.

Synopsis
Hedy Kiesler is lucky. Her beauty leads to a starring role in a controversial film and marriage to a powerful Austrian arms dealer, allowing her to evade Nazi persecution despite her Jewish heritage. But Hedy is also intelligent. At lavish Vienna dinner parties, she overhears the Third Reich's plans. One night in 1937, desperate to escape her controlling husband and the rise of the Nazis, she disguises herself and flees her husband's castle.

She lands in Hollywood, where she becomes Hedy Lamarr, screen star. But Hedy is keeping a secret even more shocking than her Jewish heritage: she is a scientist. She has an idea that might help the country and that might ease her guilt for escaping alone -- if anyone will listen to her. A powerful novel based on the incredible true story of the glamour icon and scientist whose groundbreaking invention revolutionized modern communication, The Only Woman in the Room is a masterpiece.
Written By Carole Rae at 6:30 PM

Email ThisBlogThis!Share to TwitterShare to FacebookShare to Pinterest
Labels: B's Mondays, Blodeuedd, Books and Reviews, marie benedict, the only woman in the room

Wow! Her life is better than all out fiction. I want to hunt this one up. Great review, B!

you make me want to discover more about her

Sophia,
Her life was amazing :D I think that you would like this one.

New one to me. thanks. Cheers form Carole's Chatter