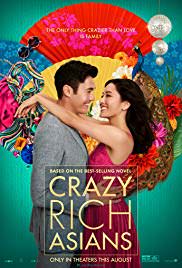 The story follows Rachel Chu (Wu), an American-born Chinese economics professor, who travels to her boyfriend Nick's (Golding) hometown of Singapore for his best friend's wedding. Before long, his secret is out: Nick is from a family that is impossibly wealthy, he's perhaps the most eligible bachelor in Asia, and every single woman in his ultra-rarefied social class is incredibly jealous of Rachel and wants to bring her down.

My Thoughts
I enjoyed the book, but I do remember that it was funnier than this one was. This was more drama and romance. I missed the funny stuff from the book, but then it was long ago so who knows how funny it really was.

Rachel is dating a cute guy, and she goes with him to Singapore for a wedding. Oh and the secret comes out, he is reeeeally rich. Like crazy rich.

The movie is then about how some of his family cannot accept her.
She is not of money
Her mother raised her on her own
She is American. Or as they said yellow on the outside, and white on the inside.
She might love him, but what has love got to do with it.

Yes obviously some of his family are idiots. And women who wanted to catch him are catty and whisper golddigger. Ugh people!

I know the Astrid story was in the books too, but I felt like it took away from this movie. I wish they had left it out.

The movie was good, but the book was better.
Written By Carole Rae at 6:30 PM

I do want to watch it too

This is a series I want to read and then watch the movies. Good to know the book has some humor, too. :)

I don't go to many movies but might have to make an exception for this one. Cheers from Carole's Chatter