Blodeuedd's Monday Review: The City of Brass by SA Chakraborty 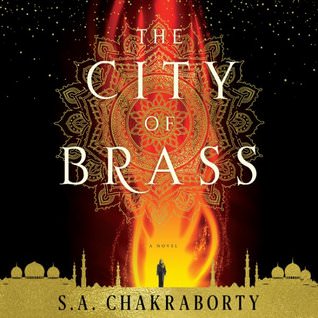 My thoughts
I have a few mixed feeling about this one. It just took so bloody long for it to get going. The first part was pretty dull. Maybe half the book? One third? I can not remember. And then it got somewhat better. But the truly good part was actually only the last 2 hours. Which is kind of sad. Up until that I was not that keen on ever listening/reading more, but those did up the game.

The part that made me stop and think was that I got Twilight feelings and that did ruin a lot. It was SO twilight! I also did not realise that this is adult fantasy. Sure there was rape talk and violence, but I did feel it was more YA. Sure the main character is 20, but she does not act like that. I could just as well have thought her 16. She was so not 20.

Let us begin. Nahri lives in Egypt in the 1700s. She is hustler and a thief. Then she meets a Djinn and she manages to loose a bit of her personality.

There is a magical world mortals do not know of. Of djinn and Peris and other things. She is taken to the city of Daevabad (on a long trip where nothing happens and he tells her nothing cos they are busy.)

At first I liked Dara, but then, he is so caricature bad boy with a chip on his shoulder. I can not love thee, you deserve someone better. Oh just cut it out man.

There is another POV in the book and that is of a prince, Ali, religious zealot and wants one tribe wiped out...right. I can not like you cos of that even if you are trying to help half bloods.

Anyway, Dara is 1400 years old and is clearly Edward then. Ali is 17 years old and clearly...damn what was that boring wold called? Anyway him! Cos Nahri longs for her brooding guy. Ali will become a friend and there is only friendship, but it felt so Twilight. It felt like she had read Twilight and thought, well I can't have her be 17, better make her 20 cos they she is an adult who easily cn love a 1400 year old guy.

I know I complain a book but the Twilight feeling so soured things for me.

And everyone are acting like dicks. The Djinn dislike one tribes that worships Fire (from which they are made). Cos allt the rest are muslims cos Suleiman put a curse on them to make them look more human and live shorter or whatever it was. Which raises more questions than anything. Why would that then become the right religion for them?

But those last 2 h were good and I will still rate this as good. But honestly, a lot was boring and the end also made me freaking mad. Cos then we learn things and omg I hate that premise. Just tell Nahri everything you effing eejits!

Narrator Soneela Nankani
She was good, I am sure this would have been a dnf otherwise

Blurb
Nahri has never believed in magic. Certainly, she has power; on the streets of 18th century Cairo, she’s a con woman of unsurpassed talent. But she knows better than anyone that the trade she uses to get by—palm readings, zars, healings—are all tricks, sleights of hand, learned skills; a means to the delightful end of swindling Ottoman nobles.

But when Nahri accidentally summons an equally sly, darkly mysterious djinn warrior to her side during one of her cons, she’s forced to accept that the magical world she thought only existed in childhood stories is real. For the warrior tells her a new tale: across hot, windswept sands teeming with creatures of fire, and rivers where the mythical marid sleep; past ruins of once-magnificent human metropolises, and mountains where the circling hawks are not what they seem, lies Daevabad, the legendary city of brass?a city to which Nahri is irrevocably bound.

In that city, behind gilded brass walls laced with enchantments, behind the six gates of the six djinn tribes, old resentments are simmering. And when Nahri decides to enter this world, she learns that true power is fierce and brutal. That magic cannot shield her from the dangerous web of court politics. That even the cleverest of schemes can have deadly consequences.

After all, there is a reason they say be careful what you wish for . . .

Listened to at Bookbeat.fi
Mini review of that site. I like the concept. For 14.95 a month you can listen yo as many audiobooks as you want. They seemed to have a lot of Harper Collins which is good.

BUT, I had huge problems (I did a free month and will not continue). When dling the app on my phone I kept having issues and the only speed I could listen to was 1x. Then I dled on my tablet and there is worked but who is taking that everywhere?

A bit hard to forward and go back too.
Written By Carole Rae at 6:00 PM

Mel
I remember that :/ I was all yay, but it was not as good