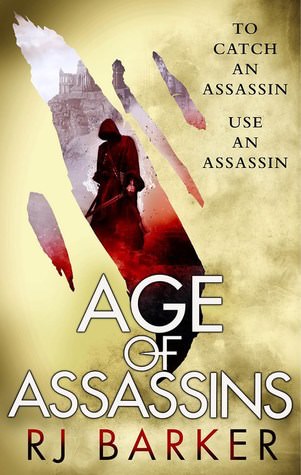 
My thoughts:
This book has me wondering, the state of the land! I so need more info, I honesty think that was my fav part. Yes that is me, getting stuck in the worldbuilding. But it was just so interesting! The land is gone to hell, magic seem to cause it. And then they bleed people into the land too! Messed up, please tell me more.

Girton is an assassin. He has a clubfoot. He is so easily overlooked. Poor guy, he really wanted some friends. Anyway, yes we follow him as he tries to find out who wants this piece of shit of a prince dead. All I am saying let someone kill that prince. He deserves it.

His master, Merela, works in the shadows, and all I am saying here is that a book about her earlier days would be so interesting!

Right, he pretends to be someone else, meets people, looks for baddies and learns a lesson or two.

The end seemed to come to quickly. This book was short! I can't believe I am saying that, but yes it was short.

Conclusion:
It was an interesting start and I do want to read more about Girton, maybe he will even do some assassin stuff then ;)

Girton Club-foot, apprentice to the land's best assassin, still has much to learn about the art of taking lives. But his latest mission tasks him and his master with a far more difficult challenge: to save a life. Someone, or many someones, is trying to kill the heir to the throne, and it is up to Girton and his master to uncover the traitor and prevent the prince's murder.

In a kingdom on the brink of civil war and a castle thick with lies Girton finds friends he never expected, responsibilities he never wanted, and a conspiracy that could destroy an entire kingdom.
Written By Carole Rae at 6:30 PM

Assassins are the thing, I believe. Good thing I enjoy assassin stories and this one is even an underdog with his club foot- score!

I looked at the number of pages when you said short lol. I hope the sequel will be great too

Sophie
I do feel assassins are a bit played out, they have been around for ages haven't they. Maybe they should die out liek vamps