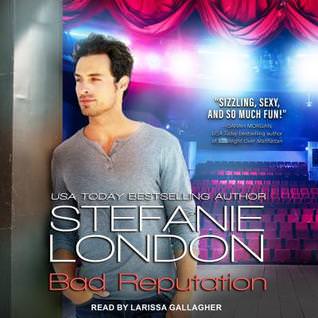 My thoughts:
Omg, this Bad Bachelor app is so evil. If you read book 1 then you know. It ruined someone's life. Here the reviews are positive, but if you are trying to put on a show that might fail, then maybe you do not want the press to discuss the size of your private parts instead of your show.

In book 1 we learned who made the app. In this one I got even madder at that person. I can not forgive that person. Enough is enough.

But yes to the book. Wes has a big *beeeep*. Or so the reviews say. He is a good guy. And all he wants is to have his show be a success, on its own merits.

Remy is a dancer who has given up trying to be the dancer she wants to be. She is scared of letting anyone in, and there will be drama. Though, stop and listen woman. Stop and listen!

There is dancing, trying to get ready in time for opening night. And falling in love with someone you maybe should not fall for at this moment. But like they could stop it.

Though listening to it felt long at times cos they talked a lot and sometimes about nothing. That works better in print.

I want to say more about the app creator , but can not. But I guess that person might be a main character in the next book....

Conclusion:
Romance, dancing and a bit of drama.

Narrator: Larissa Gallagher
I felt she was good at times with her voices and range. But I also felt she did not put enough emotion in her narrating.

Blurb:
It's true, Wes is well-endowed. But everything else is a huge misunderstanding . . . Wes Evans, son of Broadway royalty, just wants to achieve something without riding his family's coattails. Too bad the whole world is talking about his sex life after the notorious Bad Bachelors app dubs him "The Anaconda." But when he sees a talented ballet dancer, he knows she is exactly what he needs to make his show a success. Remi Drysdale only had one thought when she fled Australia for New York-never mix business with pleasure again. Ever. Working with Wes is the perfect chance to reclaim her career. Remi promises herself not to tangle with the guy who holds her career in his hands . . . no matter how enticing his reviews are on the Bad Bachelors app.
Written By Carole Rae at 9:10 PM

*waves* I am so forgetful!

I am right there with you on that sort of app or even reference list being a terrible thing and the person behind it not any better.

I do like that its focused on the world of plays and dancing.