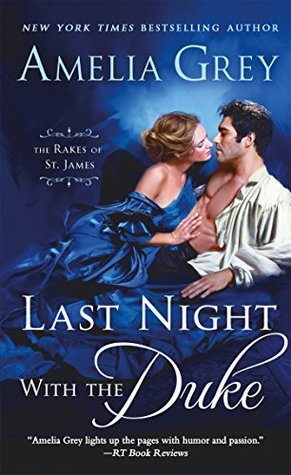 The Duke of Griffin has never lived down his reputation as one of the Rakes of St. James. Now rumors are swirling around London that his twin sisters may bear the brunt of his past follies. Hiring a competent chaperone is the only thing Griffin has on his mind--until he meets the lovely and intriguing Miss Esmeralda Swift. In ways he could never have expected, she arouses more than just his curiosity.

Esmeralda Swift considered herself too sensible to ever fall for a scoundrel, but that was before she met the irresistibly seductive Duke of Griffin. His employment offer proves too tempting for her to resist. She can’t afford to be distracted by his devilish charms because the stakes are so high for his sisters’ debut Season. . .unless one of London’s most notorious rakes has had a change of heart and is ready to make Esmeralda his bride.

My thoughts:
I like Grey's books, they are always nice. In this story we have a handsome Duke (like they are ever ugly) and a chaperone. Which did cause some tension, especially when he called her servant, which she is, but still, it does show in the beginning where his mind is.

Right, so we have Essie who has a past. Not a bad past, more her family has a past. She does not work as a governess anymore, instead she runs an employment agency. But what a Duke wants a duke gets. And she is not stupid, she sees the money in it.

Griffin also has a past cos of a stupid bet with his bffs. I mean so stupid and not nice either. But he was really young and stupid. And now he has sisters to protect since someone wants to make them pay for it. But he was a nice man, a gentleman who had learned his lesson. And I did enjoy see him falling for Essie. He went from servant to damn to I need her.

She tries to chaperone. He grows more interested in her. She tries to stay away. There is the mystery of does someone want to do harm to his sisters? And Essie having troubles with her sister. And then they all lived happily ever after.

Donna and you loved this book. She was telling me about this one. I feel I need to bump it up since I have it :)

To be honest I'd prefer a story about an ugly Duke...