Happy Saturday everyone! This month we will be discussing, "The Danish Girl".

A fictitious love story loosely inspired by the lives of Danish artists Lili Elbe and Gerda Wegener. Lili and Gerda's marriage and work evolve as they navigate Lili's groundbreaking journey as a transgender pioneer.


Let us start then :) I have a cat on me so I will see how this goes. He will get annoyed soon

Lol poor kitty. He just wants his mama. :D But yes, let us begin! What did you think overall?

Agreed. It was good. They had a good cast and the flow was nice. However, the beginning had a lot of awkward scenes….like they were necessary to understand him/her….but the scene with the mirror had me covering my eyes.

Good cast, but didn’t she get an Oscar? She was not that good, Vikander that is. I am cruel here now ;) Nah, just honest. Haha, oh the mirror scene, it made me want to laugh honestly.

I thought she did okay! Maybe not Oscar-worthy, but I think she did alright. Eddie did awesome! Hahahaha! That mirror scene. I had to look away because it reminded me of that scene from Silence of the Lambs.

I am afraid I actually can not remember if I have ever watched Silence...I know!
But yes Eddie did well.

Maybe you blocked that movie from your brain? IDK, but that scene reminded me too much of it. But overall, besides that scene, I loved Eddie. It was very interesting to see him play such a complex and tough role. He essentially had to play two characters.

I do get how that one doc thought he had schizophrenia. Cos the way he was in that role was like, the man and painter, and then the woman who wanted a life. They were two different people. It never felt like he was a woman stuck in a woman’s body, but two people battling it out.

It did feel like that more so than someone just wanting to be the opposite gender. It felt weird that his wife was so okay with it. Yes, she had her moments of “I can’t believe this! I want things back to normal!” but overall, she was pretty okay with it. She supported him/her and stayed with them even when Lili was out with a boy and whatnot. It felt….strange to me that a woman in that time period was so okay with it.

I would have been angrier, or maybe not angry, just sad. And Lili, well she obvi wanted to cheat on her wife. The whole but that is another person, that is not me, I am not doing that. I felt like that was so not cool. That is your wife! She loved you, she stood by you. Sure she had issues, but hello, who would not when your husband suddenly wants to be a woman.

Right? So I really feel (if this movie was accurate to the real deal) that this character had way deeper issues. She wanted to cheat and be with a man. Which it is fine to realize that you are swinging for the other team now, but to try and be with your spouse and lead them on? That was not cool….I hope that is not the real story. Bc it wasn’t at all fair towards the wife. Let her be with a guy that wants to be with her fully.

Yes exactly. Be with her as a woman, if the wife is cool with that. Or leave her and stay friends or something.

He/she was totally taking advantage of the wife I feel. I think the wife should’ve been just a friend and got with that one guy who was the childhood friend. LOL.

I thought so too! I was rooting for them, especially since Lili was like she was.

Yes. But I guess you can’t help who you love. The wife, sadly, still loved Lili. The ending was sad.

Aye, true :/ Yes I wish I had not seen that ending Sigh. But it was the mad truth.

Yesssss which makes it sadder to me since I didn’t know (I did research after watching)! I had such hopes for Lili! Poor girl. :(

I was like why!? That is madness, but I understood, that I did.

Yes, yes, I understood and I was rooting for her to get all she wanted (just so maybe the wife could get a HEA as well) and have a HEA….:/ it was worth it in the end I suppose.

I also googled afterwards so at least ...well I can’t say more, spoilers for others. But yeees.
BUT, it so annoyed me at the end when they went to his home village and I was all, F NO. That is not flat Denmark, and yes it was Norway as I thought.

LOL good eye. I had no idea myself since I’m not from around there. I didn’t really get the connection to why he constantly painted that same picture and the story. It had to, because they mentioned it over and over. I didn’t understand the symbolism at all.

He was happy there? I do not know, I would go mad painting the same landscape over and over again.

Utter insanity. Maybe that is the connection? Maybe he felt like he was missing something and that it didn’t feel like home? IDK really. Maybe I’ll research because it is driving ME mad.

I will! Haha. Ummmmm there was something more I wanted to add….do you have anything while I think?

Well - overall it was good, not amazing, but good. It is worth the watch for sure. I can see how this story had such an impact and is a rallying point behind the movement. It shows that this is not something that is just a modern issue. It has been a thing as long as humanity has been around. I want to see more stories like this!

Good, but not amazing, my thoughts exactly. I feel like I have nothing more to say really, nope, drawing a blank

My last thoughts - Eddie should’ve gotten a million rewards for this role. It was a risky movie and he had to play such a complex character. Plus poor guy had to learn to walk in heels elegantly which is hard for even women ;D. He did wonderful.

Yes he was great. And walking in heels is never fun ;)

Heels are pretty, but I hate wearing them. I avoid them and only wear them in certain occasions. LOL.

I do love heels, I wish I could wear them all the time, but ugh my poor feet. Then I fell in love with flats, but damn those hurt too.

I just want to wear slippers everywhere! We must make it socially a thing!!!!

Barefoot! Too bad it only works in summer here

Too much coldness here too! So a nice compromise….barefoot in the warm months and slippers the rest of the cold months. :D

Hehe, we are so off topic now. Until next month then? Should we do the movie I have already watched or another one?

Are we? I feel like Lili would approve of our discussion on our footwear! But we can do the other one. I just need to track a copy down. If I can’t find one then maybe we’ll look elsewhere.

She would approve for sure.

I shall let you know if I can find it! I’m excited.
The end?


**CAROLE'S CONCLUSION**
I've had my eye on this movie for a while. It's a breath of fresh air and it really was worth a watch. It follows an interesting man/woman who is a very complex character. Y'all know how I love my complex characters ;D. I felt bad for the wife for sure, because I feel that he/she was taking advantage of her. But it did make it even more interesting. Learning the real history is interesting. Eddie, the main actor, really deserved all the awards for his portrayal. This was good, not amazing. A few plot and flow issues, but overall good. I shall give this 4 stars. 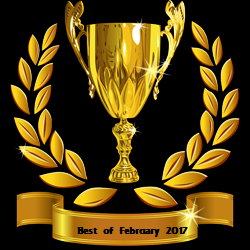 We made a good choice.