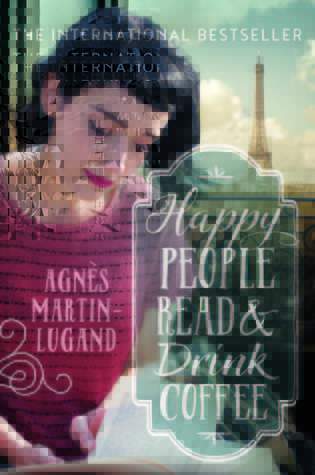 Diane has a charmed life as a wife, a mother and the owner of a literary café in Paris called Happy People Read and Drink Coffee. But when Diane suddenly loses her beloved husband and daughter in a car accident her perfect world is shattered. Trapped and haunted by her memories, Diane withdraws from friends and family, unable and unwilling to move forward.

One year on, Diane shocks her loved ones by leaving Paris to move to a small town on the Irish coast to rebuild her life alone. There she meets Edward, a brooding, handsome photographer who lives next door. Initially Edward resents Diane’s intrusion into his solitary life, but before long they find themselves drawn to each other . . .

My thoughts:
This was a short emotional read. Diane is a wreck, it has been a year since she lost her husband and child. Her business, a cafe´-bookstore is falling to pieces (yes maybe not trust your partner to hold the reins). But then again she does not care about anything. And I understand, her life fell to pieces. It's hard to pick yourself up again and start living.

So she goes to Ireland. Awww, awesome choice there. I would love to visit Ireland and it was amusing when she saw the differences between Parisians and the Irish. Also she sure felt French with her love of ciggies, and thinking of wine.

The book is her trying to live again, to find the will to live and it really is about her. Yes she meets other people, but this is someone who is trying to find something inside of herself that tells her that life can be worth living.

The blurb tells about a man, and yes there is an annoying man that she gets to know. But this is not a romance, and do not expect a romance. A man can not cure something she has to find out for herself. New love is not always the answer to everything. Life is not always that simple. But it was a nice turn of events cos that man was grumpy! So very grumpy, and his grumpiness makes her mad. And any feeling at this point is a good feeling.

Conclusion:
It was short and nice. I enjoyed it.

And then it was Tuesday

I would love to go to Ireland too! :)