Joint Review: The Lady and the Unicorn by Tracy Chevalier

Happy February everyone! This month we read "The Lady and the Unicorn". Carole is in purple and Blodeuedd is in green. 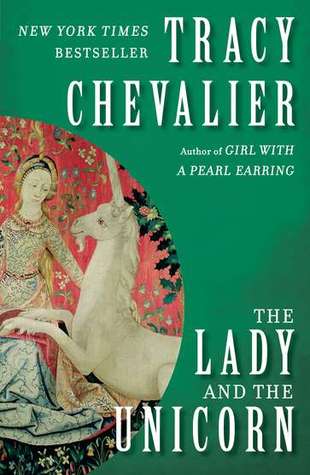 Author: Tracy Chevalier
Title: The Lady and the Unicorn
Genre: Historical Fiction
Pages: 250
First Published: 2003
Where I Got It: On my Shelf (Used Book Store)

The Lady and the Unicorn is Tracy Chevalier’s answer to the mystery behind one of the art world’s great masterpieces—a set of bewitching medieval tapestries that hangs today in the Cluny Museum in Paris. They appear to portray the seduction of a unicorn, but the story behind their making is unknown—until now.


Paris, 1490.  A shrewd French nobleman commissions six lavish tapestries celebrating his rising status at Court. He hires the charismatic, arrogant, sublimely talented Nicolas des Innocents to design them. Nicolas creates havoc among the women in the house—mother and daughter, servant, and lady-in-waiting—before taking his designs north to the Brussels workshop where the tapestries are to be woven. There, master weaver Georges de la Chapelle risks everything he has to finish the tapestries—his finest, most intricate work—on time for his exacting French client. The results change all their lives—lives that have been captured in the tapestries, for those who know where to look.


Well...this was an interesting choice of mine. LOL

I have a feeling you liked it less than I did?

I’m not sure...I’m still mixed on my feelings. It was interesting.

I get that. I enjoyed it, it was an interesting setting, but I did have issues with almost everyone.

Yes, that is prolly where my issue lies. Even the ONE character I liked turned out to be, well, not...likable anymore. Super shame. Alinor, the blind girl, did something and made me dislike her. I did end up liking poor Phillipe...I just felt bad for him and I applaud what he did (good intentions and all), but poor guy.

Told ya! ;) Phillipe, yes he was a good guy, but not memorable. If I have to pick someone it would be Marie-Celeste, sure she was a silly thing, but I liked how she turned the table later on. She at least felt human, the rest felt like idiots.

She wasn’t bad. But everyone was an idiot in their own right. It annoyed me. LOL

Gah! He needed a good kick in the arse or the other thing. He was like a poison. Every time he showed up there was something bad happening. King of the idiots.

True and I can forgive Marie for it, but the girls, they should have known better. They would not get married like that. Stay in a convent for the rest of your life then. That stupid chit Claude I did not get at all. Also that scene when they looked at drawings, I am sure I have read that somewhere else too. It just did not feel like something she would do. It was like she had gone insane.

Maybe she was insane. I batted that idea from the beginning. She was something else. Speaking of that...what did you think of the ending? It felt so flat to me...the “big” reveal of the tapestry was lacking. I think the author got sucked up in the dramas of her characters and kinda forgot about what the tapestry that was supposed the be the centralized point of the whole story. Maybe it’s just me, but yeah….

Let’s go with insane. That fits. The rest were normal, but what she did, eh, she was in LUST. And yes I get what you mean. It was all, look we have a tapestry, whatever. It did feel like she forgot about her tapestry, and that was the whole thread throughout the book. If I am not wrong and the thread was how many women Nicholas could do.

Crazy Claude is her new name. But yes, thank goodness I am not Crazy Carole, but I felt the ending lacking. Even the epilogue didn’t mention it. Haha. But I do love drama, so it was entertaining to watch everyone messing around and ruining their lives because they are too stupid to realize what they are doing is a BAD thing. Like Alinor...exhibit A.

It was good for the drama for sure. And did you not have the notes at the back? Where it said that Claude got it and then they found it in the 19th century or something?

Huh, weird. Yes Claude got it, then her husband’s family. Then they found it in a castle later on and it was cut up by peasants ;) But they fixed it

*flips through pages in book* OOOH okay, I guess I missed that!!!! Weird...I think it was because it was on the back page of the epilogue page. Hahaha. I retract my statement then!

I think I was over it and didn’t even care at that point. For some reason I stayed up SUPER late finishing it because I HAD TO know what was going to happen next with our little cast of morons.

Oh, I was not THAT into it. I was more or less reading it in peace and quiet, taking a nap, reading on. It was good, never amazing. But something saved it and made it good even if everyone deserved to get a slap in the face.

I really didn’t get into it until the thing with my previous favorite character happened. I was all, “NOOOOOO!” And I had to read on.

I never did get if that character really wanted it, or if it was a way out of another mess.

Honestly, I think she was convinced that was the only way to get out of that stinky mess. I mean….it worked in the long run in her favor….but yeah.

I should have been clearer, it was like she suddenly lost her mind, Instead we should have seen her thoughts when she was all, yup, gonna do this cos I wont be stinky.

She did go insane, because of Doom-bringing Nicholas. Every time he showed his face something bad happened and people just lost their sanity. I blame him for everything. Heck, I bet he lied about the tapestry’s due date being changed.

Such an ass. Slimey and creepy.

He was. But it was entertaining watch him ruin everything he touched. I bet his painting SUCKED!

Ha, I am sure they did. So, any last thoughts?

Mmmmm. I’m still on the fence with my feelings. It had good things, bad things, and things I’m not even sure about. Sanity was certainly questionable.

It was good, but I wish everyone had not been insane ;)

LOL but I think it would’ve been boring ;) I’m excited for next month’s read!!! *fingers crossed*

True, but he should have been more careful where he wanted to stick his junk. You are getting no new paintings that way mister!
Omg next month!!! I hope it will be good

Agreed, agreed. Until next month?

**Carole's Conclusion**
This has been on my shelf for a long while now. I've read one other by this author and that was good, so I'm not sure why I avoided this book. Maybe I was worried, because I actually really like the tapestry? Not sure. But I finally got myself to read it. And I have mixed feelings. I liked some bits, but somethings were super meh. The characters were all stupid, but entertaining to see what next idiocy they were going to do next. I liked Phillipe, but he was forgettable. I liked Alinor, because she was the smartest UNTIL one thing happened and then she was the biggest idiot. So sad. Overall, this was okay. I do recommend checking it out. The author is good. I'll give this 3 stars.

I heard a lot about this book but I haven't read it and not sure I'll try...

Melliane, you never know! You may like it more. LOL