Blodeuedd's Monday Review: The Price of Valor by Django Wexler 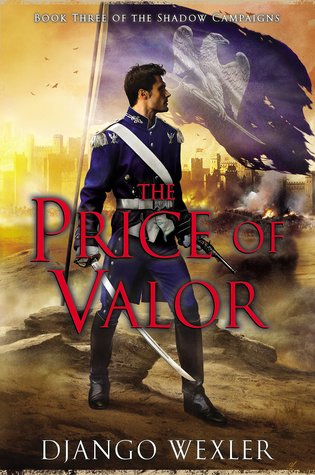 After the king’s death, war has come to Vordan. The Deputies-General, led by a traitor-seeking zealot, has taken control. Queen Raesinia Orboan is nearly powerless as the government tightens its grip and assassins threaten her life. Unwilling to see the country come under another tyranny, she sets out to turn the tide of history.

As the Sworn Church brings the powers of the continent to war against Vordan, General Janus bet Vhalnich offers a path to victory. Winter Ihernglass, newly promoted to command a regiment, has reunited with her lover and her friends only to face the prospect of leading them into bloody battle.

And the enemy is not just armed with muskets and cannon. Dark priests of an ancient order, wielding forbidden magic, have infiltrated Vordan to stop Janus by whatever means necessary....

My thoughts:
Hmm *reading the review of book 2* It seems I have the same issues with this one as I had with book 2. There I wanted it to be all war and camp, and yes the good parts here were war and camp. That is what he does best.

The parts with Winter were the best parts. She were leading the troops, marching, camping, dealing with issues since they now have the Girl's Own company and that brings out a lot of tensions. There are skirmishes and battles along the way. Winter is growing in her boots as she is a colonel now, and everyone still thinks she is a man! Well, some know the truth. But her parts were the good parts.

Then there is Marcus, I really do like Marcus, but the capital is so boring! And he spends all his time protecting the queen, and Raes is so boring! So yes her POV is boring too. I just do not seem to care about the capital, running around or the politics there. Even if I really like Marcus. I want him out there fighting!

It's a good book, but I still wish it was back to its roots. Here more and more drama shows up, and I wish for what it was before, military fantasy. Good times. Marching in the mud for miles, battle tactics, gods I am weird, I want that here, while in other books I'd love the capital stuff. But hey, he just did it so well in book 1.

Conclusion:
But I will keep on reading since it's an interesting series, but book 4 looks to be less about war. Noooo!

Cover
My first thought was, He is hot...he still is

This week is hell

some different book, curious about book 4

If you like mud and marching, perhaps you should join the army, Blodeuedd! ;p