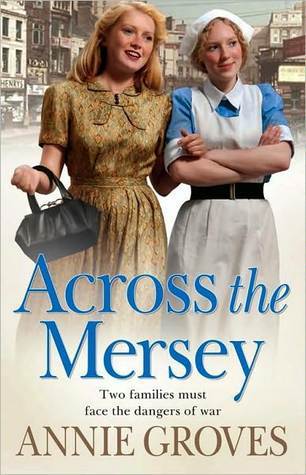 From the author of 'The Grafton Girls' comes the story of one Liverpool family preparing for the onslaught of World War Two, while trying not to fight among themselves. Jean and Vi are twins but couldn't be more different. Jean's proud of her honest, hardworking husband and their children, but there's never a penny to spare. Vi's equally proud of her husband's new role as a local councillor and their elegant new house, and has raised her children to expect the best. As war breaks out, agonising decisions must be faced. Should the oldest children enlist? Should the youngest be evacuated? All the traditional certainties are overturned. Then the twins' own younger sister, singer Francine, returns home unexpectedly and stirs up the past, even in the midst of present danger. This is a tremendous saga of fighting spirit and family closeness, and the belief that even though today is full of destruction and pain, there is hope for a better tomorrow.

My thoughts:
I liked this family saga, I read it fast, but f that bitch in the book, she  destroyed it all and hell this gets a 1. Hated that effing ending.

I can't even talk about the book cos all I wanted was that woman to buuuuuuuuuuuuuuurn!!!!!!!

Spoiler:
Ok so there is this horrid spoiled conniving bitch who is horrible to everyone. She tells lies so that a woman breaks up with the man that woman loves. She makes a plan with her brother to trap a man in marriage. And yes that man shows to be an ahole, but if I had to marry her, god, I'd never come home to see her stupid face. And then at the end, she finds I guess true love. AND will be happy. The morale of the story being that you can be a stupid bitch and not even apologize to anyone and still ge everything you want. Of course she will never be happy, she will complain about all the things she wants until that guy tires. And it just spoiled the whole book for me. I did not want her to get a happy ending, why!? did she have to get a happy ending? She did not even learn any lessons. She is still a bitch. OH OH I forgot, that new guy, well she used his sister as slave labour . Fuck this book

“The ancient ones whisper to me, Iluak,” Nana says. “They talk about you. They say a bear is waiting.” In the land of snow and ice, where the midwinter sun doesn’t rise and it’s black all day, Iluak is afraid. But he’s not afraid of the darkness. He’s afraid of whiter things.

My thoughts:
A short story set in the north where a young boy faces down a prophecy. I can't really say a lot, it was short. A good MG? novel. Maybe it was YA, but a younger crowd can read it too. Learn a bit about seal hunting, whale hunting, the first northmen coming.

The dangers of ice, water, cold and starvation. And not to take more than what nature can give.