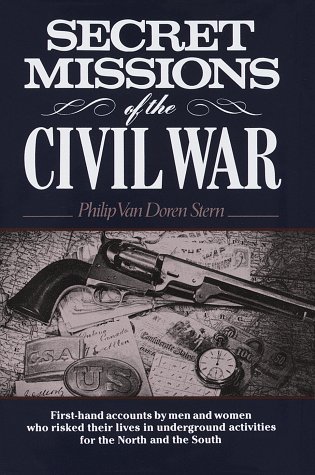 Author: Philip Van Doren Stern
Title: Secret Missions of the Civil War
Genre: Nonfiction & History
Pages: 320
First Published: 1959
Where I Got It: My shelf (Christmas gift many moons ago)

Prominent Civil War historian has woven a compelling history of the Civil War from first hand accounts by men and women who undertook secret missions and were involved in underground activities for both sides. Discussions of codes and ciphers used during this war

Tried reading this an eon ago when I was a wee thing and I couldn't get through it. I think it was too dry for me back then, now that I am an old fart I was able to get through this with ease.

I also really liked the fact the stories were first-hand accounts from men and women who lived during the times with some back-story as well. However, if you have limited knowledge on the war, this is not the book for you. There is some back-story that is missing/needed to fully grasp what is going on.

There were some pictures near the end, but I do wish there were more. Maybe some pictures of the person speaking/sharing the stories. I think that would have added a star or two.

In the end, this was good. Very interesting stories, but missing some needed back-story for those that don't have a lot of knowledge on the subject. There were a couple of pictures of some machines and whatnot, but I feel more would have made the world and stories come to life more. I do recommend this for history buffs who are interested in the American Civil War. Out of five stars, I stamp this with 3.

The cover is so dull, pssst

B and Melliane, yes the cover is BLEH. XD