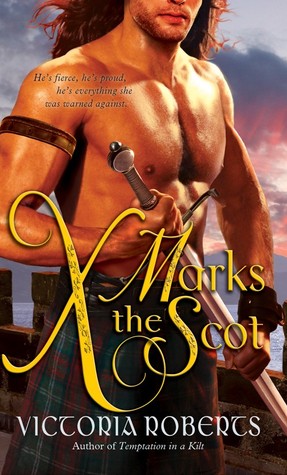 Author: Victoria Roberts
Titles: X Marks the Scot (Bad Boys of the Highlands #2)
Genre: Historical Romance & Action
Pages: 352
First Published: Janurary 2013
Where I Got It: On my shelf (B&N)

He was a Highland rogue—
wicked with a bow and just as wicked with the ladies.

Declan MacGregor hadn’t a care in the world beyond finding a soft bed and willing woman…until he had to escort Lady Liadain Campbell to the English court. The woman needles him at every turn, but he can’t just abandon her to that vipers’ nest without protection.

She never asked for a bodyguard…

Liadain wasn’t thrilled to be left in the care of her clan’s arch-rival. It was as if the man never had a lady tell him no before! And yet as whispers of treason swirl through the court and the threat of danger grows ever sharper, her bitter enemy soon becomes the only one she can trust…

Been a LOOOONG time since I read book 1. Like four years? I think I had just started really getting into blogging then. Not sure why I pushed this series to the back-burner for so long...but I say this book on sale at B&N and I had a gift card, so eh I went ahead and got it.

Lucky for me this does a-okay as a standalone, because I scarcely remember the first book and Ciaran (Declan's eldest bro) and Rosalie and this book touches base on what you need to know to move the story forward.

Declan you rogue! He is good looking Scot who loves wenches, drinking, and shooting his bow. Liadain is a kind-hearted woman who loves helping those who are ill. They come from two clans who hate each other. However, Liadain had assisted with saving his kin against her evil brother. Now that her brother is dead is needs a bodyguard while she is a ward of the King. Through some politics and twists and turns, they are forced to marry.

They share lust and a hint of respect, but it took a while for the love to come. It was realistic, but it still frustrated me how much of a jerk-face Declan was!! Liadain did NOT deserve his a-hole attitude and disrespect! I wanted to kick him in the face! BLEURGH.

The side drama was decent and enjoyable, but I wish there had been a bit more build-up to it. Maybe a hair more of the story being told in the baddies' POV. I didn't feel worried about how the drama would be fixed, so the side-plot was a bummer ultimately.

However, the love story was okay...a few lulls tho.

I want to read more about James and I hope he gets a POV someday (maybe a short story??;-D). The next book is not about him....which is a bummer. :/ Sighs oh well.

Overall, this was fun and it was nice to see Declan get his POV...even tho he was a jerk-face! I liked Liadain quite a bit. I'm glad the love took a while for them. There were some lulls and the side drama was decent, but I wanted more out of it. I do enjoy this author quite a bit and I can't wait to read whats next. Out of five stars, I stamp this with 3 stars.

I read this one too...pretty sure I wanted James' book too, I wonder if I ever got it

Melliane, I'm undecided if I want to read the third one. LOL