Book Review: Just a Kiss Away by Jill Barnett 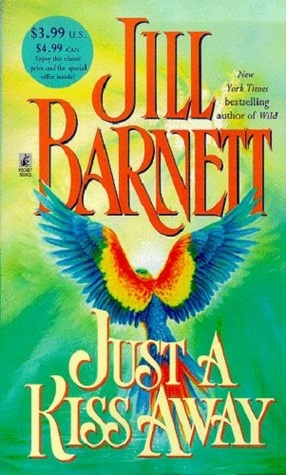 Author: Jill Barnett
Titles: Just a Kiss Away
Genre: Historical Romance
Pages: 352
First Published: 1991
Where I Got It: On my shelf (Purchased on Amazon)

Arriving on a lush Pacific island, Eulalie Grace LaRue was soon to be reunited with the father she hadn't seen since childhood. Yet before Lollie's dreamed-of meeting could take place, the lovely Southern belle was caught in the crossfire of a violent revolution -- and thrown into the rugged arms of Sam Forester. On the run in the jungle, the battle-scarred soldier of fortune didn't know what to do with the pampered blonde placed in his care. Survival was his top priority, but he could not resist Lollie's seductive charm...or deny the growing attraction between them. Though Sam thrived on chance and risk, falling in love was the one chance he wasn't willing to take.

Powerless against the desire that consumed them both, Lollie surrendered to his passionate embrace. But when he dismissed her affections, she was determined to fight for him...to prove that in the steamy heat of paradise, two hearts would find the love of a lifetime....

This has been on my TBR list for quite some time now. I finally had a chunk of time to crack it open and read it. Well…..yeah…..I’m rather bummed.

I hated Sam. I wanted to kick him.

I hated “Lollie” or whatever the heck her name was.

Her father was an a-hole.

The brothers are creepily protective over her. I get it…your baby sister and you love her. But 1) kinda creepy and 2) CALM down.

The bird was HILARIOUS! It certainly entertained me. Certainly a huge boost there, because I loved him/her (not sure if it was a girl or boy).

The beginning had promise, but it lost me once Sam met Lollie. NOT realistic. He would’ve cut her pretty little neck after speaking with her for two minutes. Sorry. Just not realistic and it lost me from there. Okay – okay – just say he doesn’t kill her, she would have killed herself someway somehow. She was a fool. But yes, there are many haters of Sam and crying out, “LOVE HER DAMMIT!” NO! NO NO NO! Sam run! RUN FOR THE HILLS!!!!! FIND A NICE GIRL WHO ISN’T A BLOOMING RICH IDIOT!

I am one for torture….so I kept reading. Granted I did a lot of skimming. Now, the ending was decent. It was the most realistic aspect of the entire novel. It was actually cute even though it was still sappy as hell.

In the end…the only redeeming quality was the hilarious bird. Loved him/her, I want a parrot! Sam was a jerk, but I don’t blame him. Lollie needed to fall off a cliff. The brothers….creepy. The father was a sorry excuse for a man. The ending was okay too, but the rest? Not so much. Out of five stars, I stamp this with 1 star.

sorry it wasn't for you

I wouldn't touch this one with my little finger. Lollie, honestly...it's a name for a Barbie doll! Parrots however are very intelligent and very demanding pets.

Ana, Lollie was her nickname I guess. Gah. If I had only known...