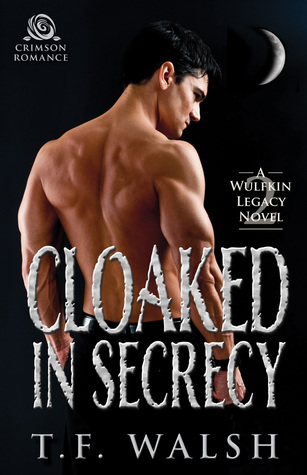 Author: TF Walsh
Titles: Cloaked in Secrecy
Genre: Paranormal Romance
Pages: Ebook
First Published: March 2016
Where I Got It: On my shelf (given to me by an author/publisher for my honest and unbiased opinion)

Death has followed Alena Novac’s circus family for years. When the police arrest her brother for a murder he didn’t commit, she has only a week to rescue him before he transforms into his wolf form in prison and exposes their wulfkin existence to the world.

Enre Ulf, a former member of the Varlac, the fearsome ruling wulfkin clan, plans to infiltrate Alena’s circus clan and take out their alpha to save his home in Transylvania. Except he never expected his wolf claiming Alena as his mate, or feeling compelled to save her brother to help protect the secrets of the wulfkin.

With the police closing in and the blood feud threatening them, Alena and Enre must overcome their pasts to save their packs’ futures.


This is the second installment of this series. The first book was amazing and I loved the world. The world continues as they switch to Enre's and Alena's POV. I'm happy to see that Enre does get some sort of happy ending, because he did get kinda screwed in the last one when his ex picked a human over him. Certainly a blow to his furry ego.

I was really worried at first, because I thought this was going to be a super insta-love story because they made-out within the first couple of chapters. However, it was just lust. Then Alena learned who was related to and was MAD, because she hates the Varlac due to something they did a while back. GOOD. I didn't want an insta-love with these two. Lust, fine. Love? No. Too much drama going on for that nonsense.

I adored Nic. Gah, I felt bad for him!

Honestly....I'm not sure if I liked Alena or not. Sure, I'm glad Enre has somebody, because I loved him...but Alena herself? Mmhmmmmm, she annoyed me a lot of the time.

The story started off fast and there was a lot going on, then it stalled out for a bit. It took a few chapters to get the locomotive moving again and then I was hooked. I finished this in the matter of a couple sessions. I simply love this world! The location is certainly refreshing and enjoyable.

I can't wait for more from this author and this world! This could be read as a stand alone, but I feel to understand the character, Enre, and the world, the first one should be read. Out of five stars, I stamp this with 4 stars.