This month Blodeuedd and I will be discussing "Shadows of Asphodel" by Karen Kincy. 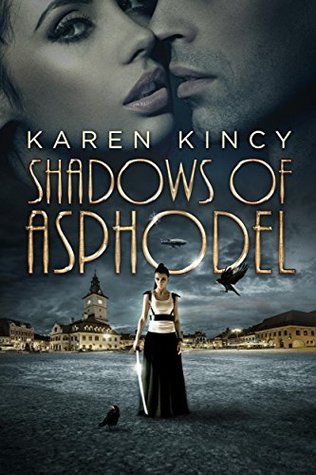 1913. Austria-Hungary. Ardis knows better than to save a man on the battlefield. Even if he manages to be a charming bastard while bleeding out in the snow. She hasn't survived this long as a mercenary without some common sense. When she rescues Wendel, it isn't because he's devilishly handsome, but because he's a necromancer. His touch can revive the dead, and Ardis worries he will return from the grave to hunt her down. Besides, a necromancer can be useful in this world on the brink of war. A gentleman of questionable morals, Wendel drops to one knee and pledges his undying loyalty to Ardis. She resists falling for him, no matter how hot the tension smolders between them. Especially when she discovers Wendel's scars run much deeper than his skin, and it might be too late to truly save him from himself.

B: Let’s get started, and this time with a book I actually enjoyed. Omg, enjoyed. No snow child, but good.

C: I have to agree! It was good. I didn’t really even notice that it was a Steampunk until I looked on Goodreads. hahaha but i’m not a huge fan of Steampunk, but I actually enjoyed this one! It wasn’t over-the-top and cheesy.

B: I do not need gadgets to be mentioned all the time, that is one bad aspect of some steampunk, but I also need some things to be mentioned cos else it’s just stupid. And I felt that this book walked that line well. Not too much, not too little. The perfect mix that made me believe in this world. And that is so important to me.

C: It was a good mix and I think that’s why I really liked it. Plus I loved the time period. Not Victorian like most steampunks, but during the 1910s.

B: Someone mentioned dieselpunk somewhere, but to be honest, I am not really one that keeps track. it was good, it was a nice period, pre war and all (and war that might not come in this world, but come on, we all know it will.) And I liked the mix of magic and tech. That is always a good mix.

C: I’ll be honest I’m not sure what dieselpunk is. 0_0 But yes, I loved the mix of historical, magic, and tech. It was nice. Did you like Ardis?

B: It’s not like I was all, I love her! She was tough as nails. I could respect that toughness. But yes I did like her. It just took me a while to warm up more to her. You then?

C: At first I really did, but then she fell in love with Wendel and was kinda obsessed with him really quick. I was hoping that the romance aspect would take a little while then. After a while, I did warm back up to her again, but she was overall just okay.

B: You have a point there. I did not think of that, but yes I was actually kind of happy when this other thing happened, and I had hoped that would continue. Instead she just got more into him, and I never felt that he loved, or liked her. She was just means to an end. The romance part did lack. Those two were not meant to be together. Him and someone else, yes, she and someone else, yes. thinking if the same person too.

C: I think he did like her...maybe not love. Honestly, I think she was something different and she was prolly the first girl/person to not judge him based on his ability.

B: I can settle for like, like is easy. But true love? No, not what I saw. That whole HE IS MAD part was really over the top too. I never saw any evidence, give me some evidence. Make it harder for me to like him, and then I will fall more deeply. Cos now he just seemed really nice. At least to me.

C: He had his sarcastic moments and was ruthless because death means nothing to him. But yeah - he was such a gentlemen throughout the story. I liked it, but I do feel he should have been more bitter at his parents…..unless he’s good at hiding it? IDK. I didn’t mind him being kind of a nice guy. I think I liked Wendel more than the other dude (the mage? I can’t remember his name)

B: I did really like Wendel, more than her. But I never felt the whole he is mad, and evil. I wish I had felt it a little bit at least. And yeah, sure he should be angry, but them they could never have kept them, maybe he grew to understand. He did hate the Asphodels more so maybe that took over.
That would be Konstantin ;) I liked him, nice side character. Oh oh, the twist, the person that shows up, that was weird. Her hint hint

C: YES that is his name. I totally blanked. Yes, he was a nice side character, but if I had to pick between the two I would be Team Wendel. I do want to learn more about Konstantin. And the twist was nice! Weird, but nice! I really didn’t expect it.

B: Always Team Wendel, just not, sigh, I wanna FEEL it. I hope book 1 makes me feel it more, I need to feel the romance. But awww Wendel, gotta love him.

C: :3 I loved how his ability was looked down upon by pretty much everyone - it was a nice. What did you think about the twist with Adris’ dad? I have mixed feelings….

B: I am not sure about it either. It felt strange, and did not make sense for me in a way. It felt too much HAHA, look what I did here. Suffer!

C: Honestly, I was hoping for something entirely different. It surprised me and I still can’t determine what I feel about that. I want to know more about how her parents got together now THAT would be a fun short story. ;)

B: That would make an excellent short story! I’d be into that.

C: :D Do you plan on reading the second in the series? I’m not sure myself. Like this was good and I do wanna find out what happens next, but for now I am still digesting this world and story. WHICH, again, I loved the world built in here.

B: I’d like to, but it’s an ebook. I can only buy ebooks on amazon, and I have like 50 cents left on this GC I got 5 years ago! Yes, I saved and saved it. So I actually can’t read more. But I hope it will be free one day *fingers crossed*

C: I think I would like to read especially if it is free or at the library (which...still free of course).

B: LOL. Well, to close this conversation. Would you recommend it? I would, it was an interesting world, sure it had a few faults, but still, interesting.

C: I would. It was fun and I was addicted to the first half. The second half drifted off a little bit, but overall I do recommend this to even those who are not the biggest fans of steampunk like me. ;)

B: Your turn next then to pick a book. And hopefully I will get my war book as soon as someone gives it back to the library.

**Carole's Conclusion - I am not a huge fan of steampunk. Not at all. I honestly had no idea going in that this technically falls into the category. I didn't realize something was up until after the first chapters and then I checked Goodreads. This is not your a-typical steampunk. The technology isn't horribly advanced and the outfits aren't crazy and it takes place in the 1910s pre-ww1 (normally it takes place during Victorian era). Also, there seems to be more magic and supernatural aspects then technology advancements. The characters were fun. I liked Wendel. I just wish that Adris and Wendel would have taken their time falling in love/lust. It seemed too quick. I am curious about the next book and what is going to happen next. The world was entertaining and I liked it.

I shall stamp this with 4 stars.

Went to the movies, have a headache, blergh
*waves*