Black Friday of Death - Avoid or Approach with Caution

Happy  Pre-Thanksgiving to Americans and other countries that celebrate their own version of this holiday.

I want to bring up a serious issue that has been bugging me for years…Black Friday.

That cursed day that I had to deal with when I was working Food Service not so long ago. I personally have never experienced this day as a consumer. I refuse to. Yes, yes, there are good deals those who love day will appeal. I totally understand wanting to get a good deal (I’m a frugal girl myself) and it is an excellent Marketing day and it helps boost the economy. However, they need to ban this day.

First, people have been hurt AND killed over this “holiday” event. It is rather morbid, but there is a website completely dedicated to counting how many people in the United States and some in International countries have perished or been injured to the point they needed to go to the hospital since 2006. 7 people have been killed and 98 have been seriously hurt. The one that really made me avoid this day was a worker at Wal-Mart was killed after opening the doors in a stampede in 2006. The consumers rushed in once the doors were opened and trampled him to death. Horrible, horrible. There are a few “honorable mentions” that were not part of the count since it can only be assumed Black Friday was the cause: 3 murders, 1 suicide, and 1 severe injury (blackfridaydeathcount.com). 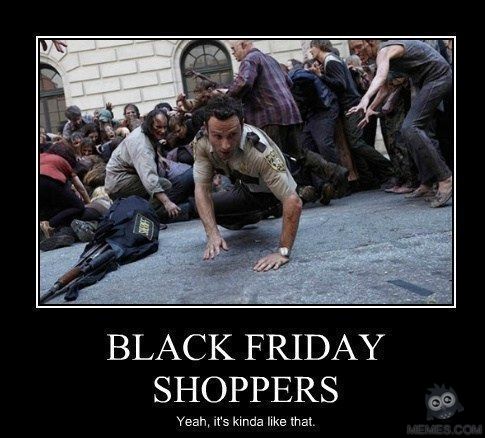 Second, in the United States this event occurs RIGHT after Thanksgiving. Morally this event goes against Thanksgiving. “Giving thanks to what we have.” Contributing in the madness and selfishness is anti-Thanksgiving. Many people will say, “Oh it is not for me – it is for Christmas gifts.” I will grant this. However, why does there need to be a sale to get a gift for someone you love or care about? When I see something I buy it I don’t risk waiting for this particular event to happen and risk it being sold out.

Third, this encourages overspending. It seems counter-productive: lots of sales…buy more then you planned too…spend the same or more? Impulse buying at its finest. Also, many people do not read the sign properly or have researched or read reviews. In the end, the deal may have seemed like a deal, but it really wasn’t.

Fourth, why in the world is it a good idea to get up at 3 AM to get to the store to get in line before it opens? Is that turkey fryer or TV or that video game worth getting up that early and standing in the cold (for those areas that get cold)? It is pure lunacy. Many people get this day off…ENJOY it. Being up that early, being in the cold, being around all those people can cause an increased chance of getting sick which may result in calling off sick at work and losing more money. Was that stupid product worth it?

And lastly….Cyber Monday exists. Half of the time the deals are better and you don’t have to get injured, die, get sick, and the chances of impulse buying is a little lower.

Yes. Do not support this horrible day. I know I will not. I volunteered to go into work since I have no ambition to even be part of society on this day. Unlike many, I will be EARNING money rather than spending money.

What are your thoughts? I suppose during an event like the Black Friday most people discover deep down that they are: a) greedy like hell b) greedy and stupid c) greedy, stupid AND violent which is really a combustible combination and I suppose leads to all those tragedies. I am glad you stay away from it - I would.

Ana, I have no clever words for you. LOL But this post made my day. I stay away from it like the plague.