Book Review: Under the Dragon's Claw by Alex George 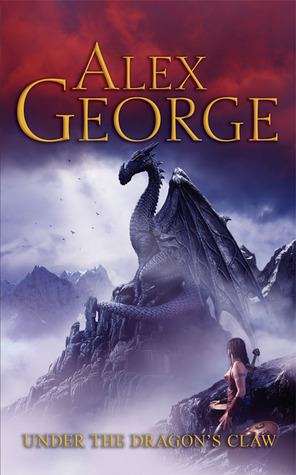 Author: Alex George
Title: Under the Dragon's Claw (Heartstone Talisman #1)
Genre: Fantasy, Adventure
Pages: ebook
First Published: January 8th, 2014
Where I Got It: Given to me by the author/publisher for my honest and unbiased opinion

"The Dark Circle is augmenting its ranks with fresh blood and will stop at nothing to achieve its goals. Their esteemed son Zarzbudin, Dragon Lord and Warlock of the Dragon’s Foot Mountains has set his eyes on Alcavia, a fortress kingdom on the furthest outskirts of strife-torn Thalagia.
Theodor leaves his isolated world and sets off on a voyage with the crew of the Sea Breeze to thwart the warlock’s plans and rescue from his clutches Princess Adelayne. Aiding him in his quest are Archon, High Mage of Aldorn, ancient Zoi and the traitor nymph Roxette. Relentlessly pursuing them with all the resources the Shadow has to offer is Archon’s nemesis, the notorious Dark Sorcerer.With a past shrouded in mystery and a future destined to be as turbulent as the seas surrounding his island home, the outcome of Theodor’s struggle is all but certain…"

Like earlier stated I read this for the author/publisher for my honest and unbiased opinion.

Yayy dragons!!!! I've been craving a book with dragons. The few that I thought were going to have to dragons in them left me upset and void of dragons. 0.0 But not only were there dragons in this they could talk and some were good guys! ^.^ I am super happy.

Along with the dragons in this world, there were a lot of different creatures running about. Mages, nymphs, dwarves, ancients, and etc. It was fun and it reminded me a little bit of Lord of the Rings mixed with YA and Game of Thrones. Weird, I know, but it worked. This did seem very YA. I'm not sure if it is officially in the category, but I would put it there if I had it my way.

There is a lot going on. A lot of characters and a lot of stories and back-stories. The first few chapters really were a blur sometimes and I had to re-read spots because I couldn't remember who was who. >__< Perhaps its was just me, but I feel that too much was thrown in at once. He jumped RIGHT into the story. I wish that he slowly introduced the characters that would follow Theo on his journey. After like 4 chapters, I finally got down and understood who was who and what was going on.

I can't really go into much detail without giving away major spoilers...

The ending was a cliffhanger...but not the annoying rip-out-my-hair type of cliffhanger. It left the reader wanting more...if they want it. If the reader doesn't want more, then its fine. It was slightly abrupt, but it worked. I did like the final battles (yes there were a handful going on all at the same time) at the end. I can only imagine a director if a movie having a ball with all the battles. Dragon on dragon, mage on mage, knight on knight, and human on evil nymph. Fantastic. I think that last little bit was my favorite scene throughout the entire book. hahaha.

In the end, this was indeed a fun adventure. The world was nicely displayed. The beginning may have been confusing at times, but once the story goes along everything begins to slow done and be understood. I really liked the final battles at the end. I would recommend this to those that like fantasy books with adventure and a little bit of romance mixed in. I'm so glad it had dragons in it. ^.^ Out of five stars I shall stamp this with...mmmm...ummmm....3. It would be a four, but the beginning really let me down.