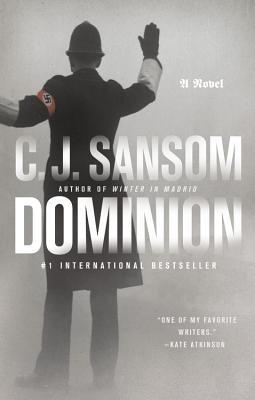 Author: CJ Sansom
Title: Dominion
Genre: Historical Fiction, Mystery, Adventure, Fantasy
Pages: ebook
First Published: January 1st, 2012
Where I Got It: Given to me by the author/publisher for my honest and unbiased opinion

"1952. Twelve years have passed since Churchill lost to the appeasers and Britain surrendered to Nazi Germany. The global economy strains against the weight of the long German war against Russia still raging in the east. The British people find themselves under increasingly authoritarian rule--the press, radio, and television tightly controlled, the British Jews facing ever greater constraints.
But Churchill's Resistance soldiers on. As defiance grows, whispers circulate of a secret that could forever alter the balance of the global struggle. The keeper of that secret? Scientist Frank Muncaster, who languishes in a Birmingham mental hospital.Civil Servant David Fitzgerald, a spy for the Resistance and University friend of Frank's, is given the mission to rescue Frank and get him out of the country. Hard on his heels is Gestapo agent Gunther Hoth, a brilliant, implacable hunter of men, who soon has Frank and David's innocent wife, Sarah, directly in his sights."

Like earlier stated, I was given this book to read and review for the author/publisher with a promise of my honest and unbiased opinion.

Goodness, I do simply love WHAT-IF books. They always stir my imagination. This WHAT-IF book revolves around the idea that if Hitler had beat the British before the US could even get involved. If Hitler did win then he would have accomplished part 1 of his huge dream: conquering Europe. Part 2 would be conquering the entire continent. However, Russia (even in this world) was still a pain in the neck and didn't bow down to Germany. Not an easy prize to win. I doubt they ever will be, too big.

Anyways....this certainly was an adventure. It truly made one appreciate the ending of Hitler and his Nazis. What a horrid world. It was a lot like 1984's world, but not as extreme. It seemed more of a possible world. Germany slowly was converting England into it's world. They made seem (through peace) that they would remain their own state. HAHAHA! Any dim-wit could see that that was not the case. THEN comes in David who at first was blind, but then he was able to see the truth and joined the resistance as a spy. Sometimes that is the safest route to go, but dammit don't get discovered!

This did have a few POV switches. It mainly stayed with David, Sarah, Frank, and Gunther. Sometimes I would find myself confused, but generally the POV switch wasn't too subtle. It generally switched at the beginning of a new chapter.

I hated Gunther's POV. Sarah's at first was boring and I skimmed. However, near the middle and end, I actually begin to like her's more. It's not her fault she really wasn't part of the action until then. Poor girl being left in the dark like 80% of the book. Tsk on David for keeping secrets, but one can understand.

This certainly was a long book. I liked the book, but sometimes it did seem to drag. Some parts were boringly necessary. When you change history in a book, one must give detail and a new history lesson. I read it, but I'll admit I skimmed a little bit.

In the end, this was good. This was interesting and it makes one think and be grateful that the English did not lose and held out until the Americans came to tip the scale in the Allies favor. Even though I skimmed a couple times, I was still enthralled with the story. Not only the WHAT-IFs story, but the people's story. Sigh. Poor Frankie.

I shall recommend this to those that love a twist to historical facts and for those that love WHAT-IF books. Also fun. I should read more of these...well...out of five stars I shall stamp this with 4 stars. More like 3.8, but I don't do decimals, so 4 it is. ^.^

What if books are the best :) They always makes me wonder