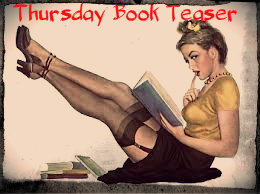 Thursday Book Teaser is a Carole-version of all the other book teaser memes out there. Every Thursday, I'll share a little tease of a book I'm currently reading. I'll randomly pick a page or I'll give some random number and flip to that page. I'll just share a few sentences to try and tease you. Anyone can join in! Just remember ...no spoilers! By the way this picture I found on Google and edited it myself.

So sorry for this being extremely late! The automatic posting thing failed *shakes fist at blogger* and then for some reason my internet wasn't working ALL DAY, so I couldn't get on and fix it. Gah! *shakes fist at internet*

Well finally got this post to look right. I do apologize to Holden Robinson for it looking crappy last time. I sent the email I received to a different email account and then downloaded it to me computer. Then I had to edit each line and blahblahblah.... Volia! It now looks fine. Damn technology.

Well, here's the book excerpt of Becoming Mona Lisa by Holden Robinson. This was given to me from CM:

"My mother once told me if I looked at my reflection long enough, my
features would become obscure, and I would gradually become a Picasso. I never
asked how long it would take, this transition from me to something I didn't
recognize. It may be minutes for some. In my case, it took a few years.
Thirty-four to be exact.

I guess it wasn't that I'd become a Picasso. I guess I'd
become more of a pooka. A pooka is an invisible creature, like the rabbit in the
old movie, Harvey, starring the incomparable Jimmy Stewart.

The distinct difference between me, and the pooka known as Harvey, was
Harvey had always been invisible. I hadn't. I'd simply disappeared. Over time.

I watched Harvey repeatedly, long before I understood the similarities I'd one
day share with the big, white rabbit.

I loved the rabbit, but I loved Jimmy Stewart even more. Every year, at
Christmas, I'd hunker down with my mother, father, and my beloved Aunt
Ida, and we'd watch It's a Wonderful Life, and string popcorn for the tree. Aunt
Ida would watch through cataracts, I through tears, and by time the credits rolled, I'd be
emotionally spent, and Aunt Ida would have half a bowl of Orville Redenbacher's
sewn to her skirt.

My mother, ever the teacher, would turn the movie's message into a lesson, one
of many she'd pass along, and it was her voice I'd most often heard in my head
as I battled my darkest days.

“Wear good underwear, in case you crash your car, Mona.”

“Never miss an opportunity to tell someone you love them, Mona.”
I guess two out of three ain't bad. I wear good shoes, and good underwear.
It's the third one I screwed up.

I was thinking of this as I pulled into my driveway on a Sunday evening, after
an uneventful shift at WalMart. My old Jeep emitted a familiar groan as we
pulled into the driveway that was once smooth, and now felt like driving a Radio
Flyer down a washboard. I shut off the ignition and we both sighed. The old truck
and the unhappy wife. I labored up the sidewalk onto the porch. My feet crossed
the fifty-year-old timbers, and the wood moaned beneath my treading. A
stranger's reflection stared back at me from the single-pane window, as my hand
sought the rusty knob. I opened the door and crossed the threshold, into the
abyss that had become my life.

I stood in the foyer and kicked off my shoes. The linoleum
was cool beneath my feet, and the loneliness seeped in almost instantly, as if it had
been there waiting. It was familiar, this sense of emptiness.

“Comfort in the evil you know,” I once read on the jacket of a book about bad
marriages. I had come to a formidable crossroads, left with the choice of
saving my marriage, or killing my husband, but advancements in forensics had
made it impossible to kill anyone and get away with it, so I got myself a
library card, and checked out every book ever written on how to mend
what seemed unmendable. I returned them all, three weeks later. Unread.

“I'm in the kitchen, Mona,” came the response from the roommate who was
my husband.
“What are you doing?” I asked, finding Tom Siggs at the kitchen table, his nose
in a crossword puzzle.

“Same old, same old. How was work?” he asked, as our eyes met, as a
recognition almost occurred between two idiots in a relationship dying of boredom.

“Work usually is,” Tom replied, his gaze back on the paper.

“I know what dinner is, Mona.”

“Did you want some?”

“Awesome,” I said, with no enthusiasm.

Tom left his paper in the waning sunlight, and I took his chair. It was still
warm, and I felt sadness and heat creep into my body, joining the loneliness
that had settled there. It was almost like being touched by him, but not, yet
it was the closest thing I'd had to a connection with my husband in as long as
I could remember.

I looked at the man who stood outside my back door. A man who was once
a stranger, then my friend, my lover, my husband, a stranger. A perfect circle,
one Dante would appreciate.

It was a question without an answer, a complex equation with an elusive
solution, one that could be found over time, if either of us were willing to make
the investment. We weren't.

“I'm troubled about something, Mona.”"
Written By Carole Rae at 9:27 PM

Just a note to let you know that your link in to Books You Loved: September was showcased in the October edition which has just posted. Would love to see another contribution from you this month! This is the link - Books You Loved October Edition

B, yeah. Not sure what happened but oh well.

What a sad excerpt.

Hmm, sorry blogger was being so mean to you. But very interesting! Love the Cover. :D

Thanks Melissa. Blogger hates me a lot. I know! The cover is really awesome!