Book Review: Seduction of the Phoenix 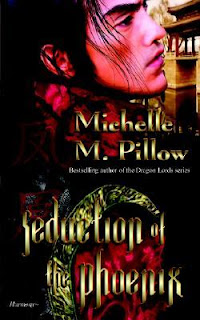 "Prince Zhang Jin is a man raised in honor and tradition, so it is a great surprise when he is compelled to claim a stranger as his bride who has neither. Francesca La Rosa is hardly a match fit for a prince. Though beautiful, she is a thief with one thing on her mind--stealing the sacred Jade Phoenix of his people. But the mystery doesn't end there. With the aid of the spirits of his ancestors he must discover who this woman is, why she would destroy the Zhang Empire and most of all, if she could ever return the love that is growing in his heart. Rating: Contains graphic sexual content, adult language, and violence."

This is the first book I've read by Michelle M. Pillow and it is also the first book of the Zhang Dynasty series, which is one the many series written by this author. She is no newbie by any means.

Alright....I was rather confused during the first couple of chapters. When I picked this up I had thought that this was a historical romance and it did seem so! However, uploads, computers, cameras, and etc was mentioned and I was like: 0_0? I went onto goodreads and found out that  this is a fantasy and sci-fi novel. All suddenly made sense and I was able to sit and enjoy the rest of the book.

I loved Jin! I loved him from page one. It drove me crazy that Francesca hurt him over and over again. Any lady would be lucky to win such a stud of a prince. Jealous? Who me? Yes. Even though Francesca was cold and mean at times, I really liked her too. You can't blame her for being her....if I went through what she had to endure, I would be like her too.

Jin and Francesca were great characters and they were made for each other. I also loved the side characters. Like Haun, Jin's older brother. Perhaps Michelle M. Pillow could write a book about me and him *wink wink*. Don't mind me. ^.^ But the book had a strong set of characters and it really made me want to read more! Some of the characters are guests from past books in other series. I may have to check out her other series.

Okay, the ending bothered me a little bit. It was so drawn out and I was in high doubt that Jin and Francesca would ever become one again. I was getting anxious and so I zipped through with reading until the last page. I know there is a second book in the series, but I wanted to know more! Like an epilogue or something. Oh well, I guess this was the authors way of making me read the second book. haha.

This was a fun book and I'm probably going to read more by this author. I would recommend this book to others who like romance, erotica, fantasy, and sci-fi type novels. If you like a light touch of historical feeling too. Jin and his people hold the strong traditions of their Chinese ancestors from Earth. Which I found interesting! Jin's people are descendants from Chinese people who left Earth and settled on their own planet. A pretty nefty idea. Anyways....I grant this story 4 stars.

I thought HR too before starting to read your review..cool :D

i feel the story was a lot better because it was Sci-fi instead of purely just HR. :)

hahahahaha it was entertaining! But thank you :)

' Rosewood: Usually used by the back, sides, fret board and bridge.

There are 12 octaves to experience with an electric
guitar and the sound is amplified through tuners and
preamps to supply optimal audio quality. Pianists
probably have figured out the instrument via numerous years of private lessons.
No matter what one you select, just how manufacturers are building this things these days,
you'll be able to be sure to get one cost-effective that may perform well.