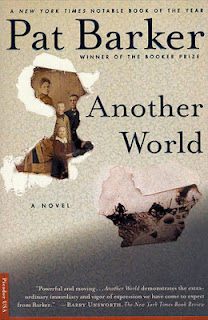 Title: Another WorldGenre:  Historical Fiction, Drama, Fiction, Contemporary Fiction
Pages: 288
First Published: 1998Where I Got It: My shelf (forgot where)


"Plagued by nightmarish memories of the trenches where he saw his brother die, Nick's grandfather Gordie lays dying as Nick struggles to keep the peace in his increasingly fractious home. As Nick's suburban family loses control over their world, Nick begins to learn his grandfather's buried secrets and comes to understand the power of old wounds to leak into the present. As a study of the power of memory and loss, Another World conveys with extraordinary intensity the ways in which the violent past returns to haunt and distort the present."


This is the first book by Pat Barker I have read, but it won't be the last.


Okay...this book took ME FOREVER to read! Not because it was extremely long or anything, it was me. You know those stories that you should be interested in and normally you are, but you just arn't? This book was that book for me.


A nice family drama mixed in with historical bits is usually right up my alley, but for some reason I didn't really care much about these people. Perhaps it was because I couldn't connect with them. I only cared about Gordie, the grandad who was dying. I felt horrible for him! Poor guy. He survived WWI and a stab to the gut from a bayonet. He survived cancer. However, in the end he had a stroke and had to live in misery the last few weeks of his life.


Throughout the story while grandad is suffering from his troubled past and side-effects of the stroke, Nick and his family are being all butts and selfish. I just didn't care about Nick and his little family of drama-kings and drama-queens.


After reading some other reviews, I guess the struggles of the family was suppose to somehow connect with grandad's WWI past. I guess I missed it. I have no idea. I really wished that the story was revolved around grandad more.


Don't get me wrong...I loved Pat Barker's writing and I can't wait to read another of her books, but this was not the tale for me. I wouldn't really recommend this book to others, but I would suggest reading one of her other books. She's a wonderful author! She has great potential! There isn't much else to say and I feel bad that my review is relatively short. Oh well. Out of five stars I grant this one 1 star. :(

Hm... It sounds like it could have been really depressing, and not in a good way if it wasn't done quite right. To be fair to depressing stories, whoen done well they can be wonderful and soul-shattering. :)

It was for grandad, but you are right...depressing stories are suppose to be wonderful and soul-shattering.

I read one of his books, only cos Sassoon was in it, got a historic crush on him

lol that is a random historical crush, but i can see why

Sorry this didn't hit the mark for you. Too bad, sounds like the making of a good story.

Maybe you would like it better than I Irene!

Thanks for sending in the link. We've got it now and will link it to the reviews page and get a sample of your review up on the main page for Sept. 24.

Thanks you guys! Can't wait!