Had an extremely busy weekend. Better late than never, eh? Well this a continual of 'The Raven Queen' series that I just finished last week. While I was working one day I thought struck me, "What about poor baby Edgar?" Due to the tragic tale of his mother, would he find love? Then this picture was presented and I knew that this would give a little glimpse to Edgar and his love. ^.^ Enjoy....here are the links to past series that inspired this story: 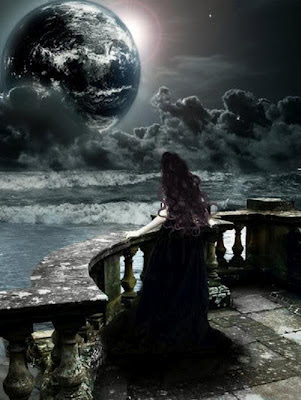 The Light Queen
by: CaroleRae

The horrendous sounds of battle continued on the other side of the castle. This battle had been going on for hours. However, it seemed like an eternity! I couldn't stay cooped up any longer, especially while my own husband was down below with his soldiers. A loud boom vibrated the room and the cries of the wounded seemed to become louder and louder. I could feel myself drowning in the guilt. This was all my fault. If I hadn't ran away with the young King Edgar and married my original betrothed...none of this would have happened.

Without a word, I stood from my place at the window and ran. I ran from the accusing eyes of the other noble wives. Many of them would never be able to see their husbands. They hated me and did I blame them? No. I hated for myself for letting Edgar steal my heart, because now he may die. There was only one way to end this battle here and now. I had to stop this battle, not just for my conscious, but for the country and people I have grown to love. No one should have to die for a silly girl.

Busting through the double doors to the balcony, I made myself to the railing. We had exchanged vows here and not too long before we were attacked by the new King Huron, son of the late King Monstrsor, and his forces we made love here. As I looked below, I could see the bloodshed by the side of the sea. A sob escaped my lips. What I have I done? Our forces were being pushed further and further inland. We were losing. King Huron would have my Edgar killed and he would have everyone murdered. They would be the lucky ones, my death wouldn't come so quickly.

I touched my belly and whispered an apology to my unborn child, "I'm sorry little nut...but I must save this kingdom and your father. Perhaps he'll remarry and you'll be reborn." Looking up at the moon, I gave a small prayer that Edgar would understand and I crawled up onto the railing. This was the end, but it was odd...I wasn't scared. This was the only way.

Looking back, I seen the ever faithful Councillor Iago. He must have been an extremely good looking man in his youth for he still held some of his attractiveness. His wife must be thanking her lucky stars that she married this man, "Hello Councillor Iago." I smiled wanly at him. Why was he here?

"We can win this war. Reinforcements are coming. Please, Rayley."

Iago's normally calm and collected face grew red and his features morphed into a look I've never seen on him before. Was it anger? Hate? I wasn't quite sure, but it scared me, "You have no idea what you would do to Edgar if you did this! His mother killed herself! Do you know what his first memory is? Do you?" I shook my head, "His first memory was him throwing a fit because he wanted to see his mother, but it was left to me to tell him that his mother was dead and was never coming back. All his life he was quiet and lonely. But when he found you, you lite up his whole world. You made his life meaningful! If you kill yourself like his mother did, then you will push him into darkness. You might as well slit his throat yourself!

I paled at his words, but I must defend my actions, "But what if he dies!"

"Then you will live on! You will be a mother to that child! That's how he would want it."

I looked at him and then down at that battle scene below me. My heart tried to make me take that step and into death's arms, but my body and my mind forced me off the railing into Iago's arms. Tears ran down my face, "Oh Iago!" I cried into his chest.

Iago gave a small cry too, "Thank you Anabel for not doing it. Thank you." He hugged me tight.

Did he just call me Anabel? That was Edgar's mother's name. Was Iago there when Anabel took her life? Why did she take her life that way? All I knew was that she broke the blood-oath and left the kingdom. She killed herself. Was it for love? Perhaps Iago would tell me one day.

As Iago and I sobbed. There was a shrill call in the air, "VICTORY! LONG LIVE KING EDGAR AND QUEEN RAYLEY! VICTORY!"

Thousands of voice cheered along. We won? Iago and I looked at each other. He wiped away my tears and smiled, "I told you didn't I? I wasn't made a councilor for no reason, my Queen." We laughed and ran to the railing to see our men. Swords and guns were bouncing in the air as all the men cheered and demanded all the galaxies to hear their joy in victory.

I looked from face to face, looking for my love. Where was he? Then suddenly I heard his velvet voice behind me, "LeyLey."

I turned and there he was. Tall, dark, and all-so handsome in his black and silver uniform. Without a moment to waste, I ran into his waiting arms. I kissed him for all I was worth.

I nearly had her jump, buuuuuuuuut I went all happily ever after on you guys. lol. ^.^ I know, Iago is just....awwww.

I don't do HEA much, but when I do...I make it super duper lovie dovie. lol