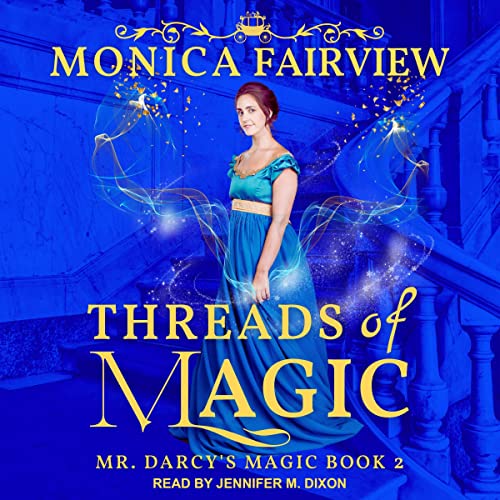 I do like PP variations, in every shape and form. And in this one there is magic! Darcy is a royal mage and they are a proud bunch. Lizzy coming in from another set of life is not so welcomed. But they married, they found that they are connected in magic, but they still have a long way to go. Darcy being Darcy.

And the French mages are attacking!

This book takes place on Netherfield where they are hiding out. Lizzy is looked at with suspicion. They royal mages are being such asshats!

Magic, danger, war. Something is not right. Who to trust, and how to make them trust her?! Also, Jane shows up in this one. Nice change of things.

I enjoyed it. It was very different from other ones and follows everything loosely.

Elizabeth Bennet may be a heroine, but by defying some of the most powerful mages in England, she has made enemies who will stop at nothing to embroil her in scandal. So when she is accused of endangering the Royal Mages through her reckless actions, she no longer knows who to trust. Even the gentleman she loves is taking their side. It seems the only person who believes her is the captive French mage who is imprisoned in the cellar at Netherfield.

Meanwhile, Fitzwilliam Darcy is willing to fight to the death to defend Elizabeth, if only she would stop getting herself into trouble. Why does she always have to break the rules? And why does even her sister Jane cause him so many problems?

Join us in this magical Jane Austen Regency variation. Set mostly in Meryton, with familiar beloved characters from Pride and Prejudice, you will once again be captivated by Elizabeth and Darcy as they struggle to find true love against the backdrop of England’s war with Napoleon.

I am behiiiind
And have fun reading!