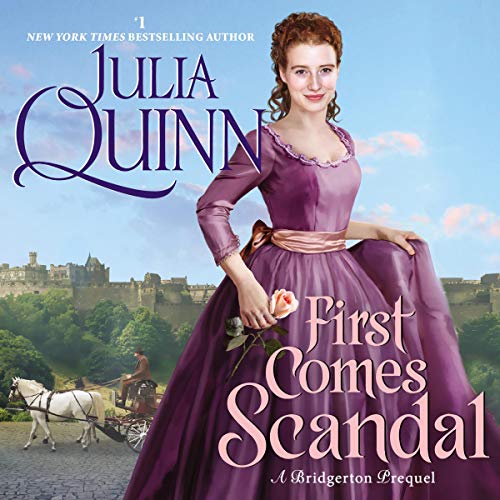 Poor Georgiana, she got abducted, and that makes her ruined. Ugh the times right! Her choices are marry the guy, no way, he can rot! Or be the talk of the town, or...

Nicholas is studying medicin., and I am sure he will become a great doctor cos he sure has the touch.

I mean, honestly, nothing happened. They are neighbor, they talk, they marry since scandal and all, then they take a looong drive up to Scotland. There they get a house and the book ends. Yeah, no drama at all, not that I want silly drama, but it was rather emotionless at times. Nothing happened. Except for some silly cat business.

They do fit together, and they have been friends forever. And obvi they then fall in love. But yes no real hardship or anything scarier than a howling cat.

So I am a bit torn, I do love Quinn, but the two latest books by her have been a bit so and so.

Narration.
Ok so I must have neg feelings about the book cos now I do not remember one thing

Georgiana Bridgerton isn't against the idea of marriage. She'd just thought she'd have some say in the matter. But with her reputation hanging by a thread after she's abducted for her dowry, Georgie is given two options: live out her life as a spinster or marry the rogue who has ruined her life.

As the fourth son of an earl, Nicholas Rokesby is prepared to chart his own course. He has a life in Edinburgh, where he's close to completing his medical studies, and he has no time—or interest—to find a wife. But when he discovers that Georgie Bridgerton—his literal girl-next-door—is facing ruin, he knows what he must do.

It might not have been the most romantic of proposals, but Nicholas never thought she'd say no. Georgie doesn't want to be anyone's sacrifice, and besides, they could never think of each other as anything more than childhood friends... or could they?

But as they embark upon their unorthodox courtship, they discover a new twist to the age-old rhyme. First comes scandal, then comes marriage. But after that comes love..
Written By Carole Rae at 6:30 PM

Huh... doesn't sound like a big winner. I don't think I've read this author. But I see her name everywhere.

The cover seems....off. I think it is her face.

Well that sounds a bit flat even for my low angst love. :)