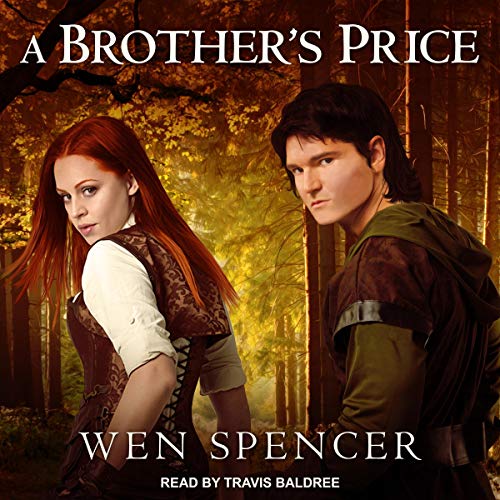 My Thoughts:
This book was really good, it turned everything you knew upside down, and I did go all weird at one point, then I righted myself. No, not weird. We are just learned to think such in our male society.

If this had been reversed it would have been a 80s romance. With dubious content and everything. But it is not.

For every 20 women there is one male. SO yes they are the price in this world.
They are owned by their mothers, their sisters, their wives and can be sold and bartered. (nothing new there, that is the fate of women still.)

Since there are so few men sisters share a husband and guard him well. Even if it is outlawed there are still men taken captive by women who need a husband. Raped to get them with child or sold to a Crib so they can service woman after woman, hour after hour.
The men take care of the babies and cook. Women take care of the farm, the businesses or fight wars. Men are soft creatures. They are not thought to read or write. What could would a man have with such silly ideas in their heads.

They are the ones that needs to show of their assets and wear pretty clothes to catch a good family.

A man must be a virgin on his wedding night. Else he is ruined.

A man will marry at 16. His brides might be much elder (like that is anything new, girls have married older men for ages). But that is weird some of you say. Why? Then it should be weird for women to marry anyone older.

Yes see, I liked how it played with all those things. The 16 marrying someone 28 was the one thing that I found strange, before I realised that the only reason I thought that was strange was cos he was a man. If this had been a historical fic book and the bride 16 then I would not have blinked.

This was a marvelous world! And a dangerous world where I would not have wanted to be male. It was a scary world for men filled with rape threats and scary women lusting after you.

I have talked on and on about the world! Ok SO Jerin meets a princess who takes liberties and he is all in love. His family guards him like hawks and they are all trained to fight. Jerin has a great home actually, he was thought to read and write and got to play outside with the girls. But he is to marry soon. And the elder sisters wants a husband so Jerin needs to fetch a price.

There is adventure, and Jerin falling in love at every turn. Dangerous plots at the capital and scary woman wanting the pretty young debutante.

I could not fall back asleep so I listened for like 4 hours one morning to find out how it worked out for poor Jerin, and you know what, like the romance it would have been if he had been female, everyone gets HEAs

Conclusion:
Interesting listen. Hard to out down

Narrator
I did feel he made Jerin a bit too old, but on the other hand it worked for the life he led. Since there is like one other male present then he sure does a lot of female voices ;) Men are like I said scarce in this world.

Cover
Nope. Where is his pretty long hair that got braided with pretty things in it and bows. And his clothes that shows what a catch he is ;)

Story
In a world where male children are rare, a man is a valuable commodity - to be sold to the highest bidder....

It isn't easy being the oldest boy in a house run by women - especially for Jerin Whistler. The grand-matriarchs of his clan are descended from soldiers, spies, and thieves. That's partly what's kept their family alive in the wilderness. But it also means Jerin's doomed to marry the girls next door - a fate he's convinced is worse than death. But Jerin gets in even worse trouble when, in the process of a daring rescue, he falls in love with a royal princess who's as high above his station as it's possible to be.

Ren knows that Jerin is too far below her class to be an appropriate match for her and her royal sisters. But then she hears rumors of a long-held Whistler family secret - one that might provide a way for them to finally be together. Unfortunately, she still has four sisters to convince. And that's before Jerin even comes to the capital - where simmering political tensions will threaten not just their love, but all their lives....

What a unique concept!