Bloduedd's Monday Review: Someone to Watch Over Me by Lisa Kleypas 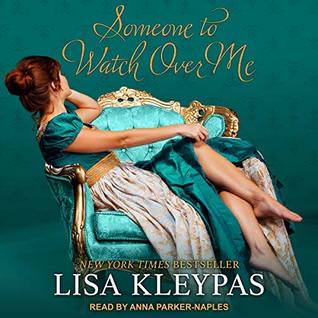 My Thoughts
The blurb kind of makes it seem like any woman would love to marry Grant. But they would not. See Grant might be a famous bow street runner, but he is a commoner, so no noble woman would have him in the end. But hey do anyone else he is an excellent choice. Handsome, rich and famous. Not that he wants to marry, he has his hands full with his job. And frankly, he was sort of a d*ck at times. To Vivien that is.

See, these two met. Spoke for like 5 min, and then he is all revenge! Oh man, chill! He lost me a bit there, what a d*ck.

Next time they meet he saves her when someone has tried to kill her. Vivien is a famous courtesan and has slept with half of London and enjoyed it. Dang, this woman loves her "job". Good for you.

Alas, she has amnesia. So now I am stuck with D*ck Grant, and sweet Vivien who is nothing like the alluring woman she used to be. She was so sweet, innocent and kind. And Grant is all, she is lying! If I was her I would have run, but hey, someone is trying to kill her so sure it is safest with him. I just wish he hadn't been a d*ck in his thoughts!

But, yes when he does get over it they are perfect for each other. He needs that sweetness, and she needs him right back.

And there are seeeeeeeeeeeeeeecrets. Secrets I did not see coming! Dang! Not just about who tried to kill her, but more. SO much more. Oh la la.

There is some suspense too as  someone is still after her.

And passion as they can not say no to each other.

But the ending dragged out a bit. It was good, it was just long and then there was an epilogue on top of that. I felt it should have ended when the suspense ended, but then it was like 1 hour left.

Conclusion:
Still, fun with two people that so do not fit. And the secrets were so good.

Narrator
I was unsure at first, for the first 5 minutes. But after that I was hooked. I liked her different voices and her alluring Vivien was great.

Blurb
Grant Morgan is one of London's most eligible and unattainable bachelors. He's also a powerful member of the Bow Street Runners, and when he's called to the waterfront late one night to investigate a drowning victim, Grant is stunned to recognize the face of Vivien Rose Duvall, a well-known woman of the night. He's even more startled when he realizes that she's alive. With no one to care for her, Grant carries Vivien to his home and revives her, only to learn that she is suffering from amnesia.

Vivien hesitantly accepts her handsome rescuer's claim that she is his mistress, despite her misgivings about her true identity. Nevertheless, she can't deny the marks on her throat that prove her near-drowning in the Thames was not an accident, and now she must trust the man who claims her as his paramour, for her life is in danger. As Grant searches for Vivien's attacker, the two find themselves falling in love, all the while struggling to stay one step ahead of the evil forces that will stop at nothing to see Vivien dead.
Written By Carole Rae at 6:30 PM

Email ThisBlogThis!Share to TwitterShare to FacebookShare to Pinterest
Labels: B's Mondays, Blodeuedd, Books and Reviews, Lisa Kleypas, Someone to Watch Over Me

Great! It's an author that I'm curious to try

Mel
For a big name, I have not read many by her

Some of Kleypas novels are surprisingly good...