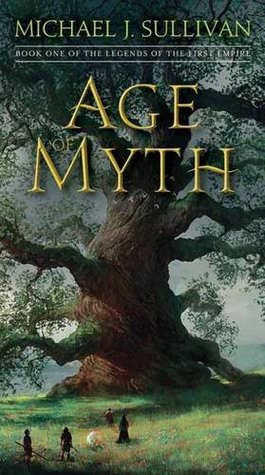 
My Thoughts:
I actually had a hard time getting into this book, so for once I am glad I took a breather. Because it was not bad, it was just long. A took a long break and then I started again, this time the pages flew by and I read it in a few days. It felt light and thrilling. I guess sometimes a break is good, but only if you know you will like it when you start again (I can not say the same for another book I put on break.)

This one takes place before the Riyria series, a series I really should read again cos suddenly I have so many questions! You can read it before that series, or after. Because reading it after R makes you go all whaaat? No way. Hehe.

Raithe kills a god. What is up with that?! The Fhrey can not be Gods if they die that easily or? As for Raithe he is one of those really good guys that you do like cos he is honorable and just.

Persephone is a widow trying to deal with her new role in their little society. She is smart and resourceful. Not a good thing if the new leader wants to look good. Oh I liked her, she was older, she did not back down. Though she should have seen a few things coming.

Suri is a teenage mystic. Mysterious and weird. Love her. She warns them that war is coming. Well obviously since a human killed a God. It's not like they can let that rest now can they.

Things will happen, but that war is still ahead of them. I really liked the whaaat moment I had regarding a certain God. That blew me away. Maybe I should have known it, but it was so long since I read Riyria.

Conclusion:
I liked the characters and I can not wait for more. I like Sullivan's style, it is very old school, which for me is perfect. Lighter you know.

Blurb
Since time immemorial, humans have worshipped the gods they call Fhrey, truly a race apart: invincible in battle, masters of magic, and seemingly immortal. But when a god falls to a human blade, the balance of power between humans and those they thought were gods changes forever.

Now only a few stand between humankind and annihilation: Raithe, reluctant to embrace his destiny as the God Killer; Suri, a young seer burdened by signs of impending doom; and Persephone, who must overcome personal tragedy to lead her people. The Age of Myth is over. The time of rebellion has begun.

I'm glad it worked out wonderfully to take a break and come back when the right mood took you. Oh yes, some fantasies can get the size of doorstoppers. :) New to me. I'll have to look it up thanks for the hint of when to read it..

Sophia,
Sometimes it works, sometimes not. I am glad I gave it another go :D

I liked the Riyria series so maybe I should look for this one too.

It's great that you found a good new series!