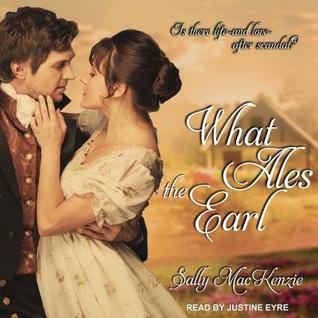 My Thoughts
I liked that this one did keep true to time. For most of the book it does not even hit Harry that he could marry Pen. Why would he? He is an Earl, she is a farmer's daughter. And that was the sad facts. But hey, this is romance. Do NOT worry.

Pen and Harry spent a glorious summer together. He went off to War, she found out she was pregnant and fled. He is now back and is an Earl. She is making ale and living with a bunch of other women. He wants to marry a lady to get an heir and a spare. She wants a secure home for her daughter.

Harry was like a nobleman would have been. He would marry someone equal to him, he would not love her and they would do their own things. And then he sees Pen and offer to have her as his mistress (after some time, he is not a total arse.) Yes, I thought that was perfectly reasonable. It's not like he would have seen her and thought must marry her! Everyone would gossip after all. His first thought was mistress and it took some time for his mindset to change. I thought it was stupid of him, but yes reasonable.

Pen knew these things too. But she also wanted more, and I admired her for that. Good for you!

They have a lot of talking in front of them. And him getting to know their daughter. A crazy lady will emerge. And when he finally sees the light it is wonderful. Because this is a romance and even farmer's daughters get those HEAs.

Conclusion:
Romance, a bit of ale and some nekkid times.

Narrator.
Justine Eyre is great, I have nothing bad to say about her. I like all her voices and her accents.

Full SynopsisScandal does not define the "fallen" ladies of Puddledon Manor's Benevolent Home. Instead, it's a recipe for an intoxicating new future as the women combine their talents—to operate their own brewery and alehouse . . .When Penelope Barnes arrived at the Home with her young daughter, she discovered a knack for horticulture—and for cultivating the hops needed to produce a superlative pint. She put her scandalous affair with Harry Graham firmly in the past, along with the wrenching pain she felt when he went off to war. After all, she'd always known a farmer's daughter had no future with an earl's son. Now she has the pleasant memory of their passion, and she has little Harriet . . .Harry went off to fight for the Crown unaware that his delightful interlude with his childhood friend had permanent consequences. Now he's back in England, catapulted into the title by his brother's untimely death. He sorely misses his former life of unfettered adventure, so when he has reason to explore Little Puddledon, he jumps at the chance. But what he finds there is something—and someone—he never knew he'd lost, and a once forbidden love whose time has come, if only he can persuade Pen he's home to stay . . .
Written By Carole Rae at 6:30 PM

Pen was a darling